Liver sections from yellow fever (YF) virus–infected (A and C) and YF virus-infected ribavirin-treated (B and D) animals. Arrowheads show Councilman bodies. A and B, Hematoxylin and eosin stained. C and D, immunoperoxidase stained. (Original magnification × 40.) 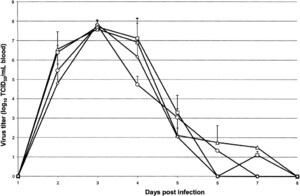 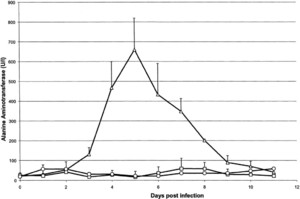 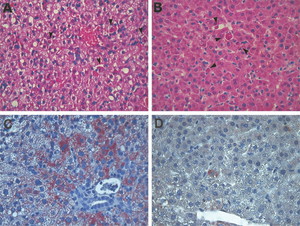 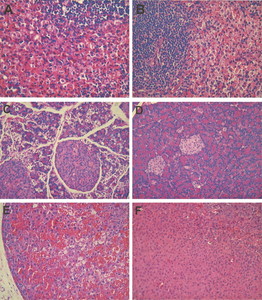 Ribavirin was evaluated as a potential treatment of yellow fever (YF) in a hamster model of the disease. Ribavirin treatment during the first five days after YF virus infection improved survival, reduced tissue damage in target organs (liver and spleen), prevented hepatocellular steatosis, and normalized alanine aminotransferase levels. The results of this study suggest that ribavirin may be effective in the early treatment of YF, and that its mechanism of action in reducing liver pathology in YF virus infection may be similar to that observed with ribavirin in the treatment of chronic hepatitis C virus infection.