Thin blood film from patient 2 showing all stages of the asexual forms of Plasmodium falciparum with a high proportion of mature schizonts. 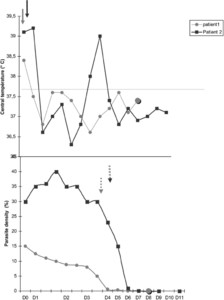 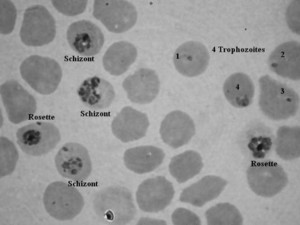 Some of the immunologic mechanisms involved in malaria physiopathology remain unclear. In animals, the spleen seems to play a key role in protecting the host against malaria. However, little is known about the effect of spleen dysfunction on human malaria. We report two severe cases of Plasmodium falciparum infection with unusual clinical and parasitologic features in two splenectomized men living in French Guiana. The peripheral blood of these cases showed hyperparasitemia, with a high proportion of mature parasites and leukocytes with malaria pigment. Despite appropriate treatment and adequate absorption, hyperparasitemia persisted. Parasite clearance was delayed and one patient died. Only the patient who died had the merozoite surface protein 1 allele B-K1 and the varD gene genotype, which is considered to be a probable parasite virulence factor. These uncommon cases differ from most of those described in the literature, illustrating the complexity of the mechanisms underlying the protective function of the spleen in human malaria.