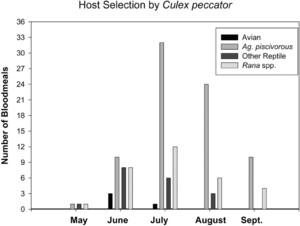 Uranotaenia sapphirina, Culex erraticus, and Cx. peccator were collected in an enzootic eastern equine encephalomyelitis (EEE) virus focus in central Alabama (Tuskegee National Forest) from 2001 to 2003 and analyzed for virus as well as host selection. EEE virus was detected in each species every year except 2003, when pools of Cx. peccator were negative. Most (97%) of the 130 Cx. peccator blood meals identified were from ectothermic hosts; 3% were from birds. Among blood meals from reptiles (approximately 75% of the total), 81% were from Agkistrodon piscivorus (cottonmouth); all amphibian blood meals (approximately 25%) were from Rana spp. with > 50% taken from the bullfrog R. catesbeiana. Host identifications were made from 131 of 197 Cx. erraticus, but only 3 (2%) were derived from ectothermic species. Identification of Ur. sapphirina blood meals proved difficult and only 2 of 35 hosts were determined. Both were from R. catesbeiana. Ectothermic species are possible EEE virus reservoirs in the southeastern United States where species such as Cx. peccator and Ur. sapphirina occur with large, diverse reptilian, amphibian, and avian populations such as those at the Tuskegee site.