Phylogenetic tree based on nucleotide sequences of the capsid gene of 19 Sindbis-like virus and Whataroa virus (WHAV) isolates. The tree was constructed using the neighbor-joining method. The tree was out-grouped by the sequence of the same region of Aura virus. Numbers indicate bootstrap confidence values. Vertical distances are arbitrary. Horizontal distances are proportional to the genetic distance as indicated by the bar. P/E = Paleoarctic-Ethiopian; SW = Southwest; O/A = Oriental-Australian. 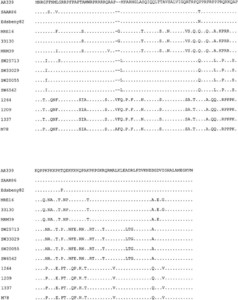 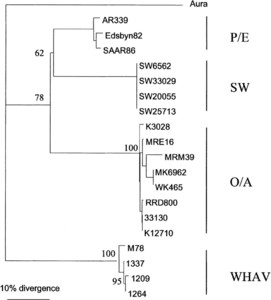 ANTIGENIC AND GENETIC TYPING OF WHATAROA VIRUSES IN AUSTRALIA

Search for other papers by GRAHAM W. BURGESS in
Current site
Google Scholar
PubMedClose
, and
ROY A. HALL
ROY A. HALL

Search for other papers by ROY A. HALL in
Current site
Google Scholar
PubMedClose

We recently characterized three novel alphaviruses isolated from mosquitoes captured in New South Wales, Australia. Initial cross-neutralization studies revealed antigenic similarity to the Sindbis virus (SINV)–like Whataroa virus (WHAV), heretofore found only in New Zealand. Nucleotide sequence analysis showed that the WHAV-like viruses shared >99% nucleotide sequence similarity with each other, and 96–97% similarity with prototype WHAV. Enzyme-linked immunosorbent assay reactions of a panel of monoclonal antibodies to SINV showed that the novel WHAV-like viruses displayed identical binding patterns and were antigenically distinct from all SINV isolates examined. Although these viruses displayed a similar binding pattern to prototype WHAV, three monoclonal antibodies discriminated them from the New Zealand virus. Our results suggest that these novel alphaviruses are antigenic variants of WHAV and represent the first reported isolations of this virus from outside New Zealand. The monoclonal antibodies used in this study will be useful for typing new SINV and SINV-like isolates.

Sindbis virus (SINV) is a mosquito-transmitted alphavirus (family Togaviridae, genus Alphavirus) found in Europe, Africa, Asia, and Australasia and has been responsible for outbreaks of fever and rash.1,2 Previous studies have demonstrated the existence of two major genotypes of SINV, the Paleoarctic-Ethiopian (P/E) genotype found in Europe and Africa, and the Oriental-Australian (O/A) genotype found in Asia and Australasia.3,4 More recent genetic studies of SINV isolates from mosquitoes trapped in the southwest region of Western Australia between 1990 and 1998 have demonstrated the existence of a third genetic lineage of SINV, the southwest (SW) genotype.5,6 Close antigenic relatives of SINV (SINV-like viruses) also have been isolated from Europe (Ockelbo virus), Azerbaijan (Kyzylagach virus), China (strain XJ160), South America (Aura virus), and Whataroa virus (WHAV) from New Zealand.7,8 On the basis of genetic differences, the latter two are considered species distinct from that of SINV.

Here we report the identification and characterization of SINV-like viruses from mosquitoes trapped between 1989 and 1990 in New South Wales, Australia. We also describe the use of a panel of monoclonal antibodies (MAbs) prepared to three SINV genotypes for precise typing of SINV and SINV-like viruses.

African Green monkey kidney (Vero) cells were grown in medium M199 (Gibco-BRL, Gaithersburg, MD) supplemented with 10 mM HEPES, antibiotics (100 mg/L of benzylpenicillin and 10g/L of gentamicin), and 10% fetal bovine serum (FBS) for growth, 2% for maintenance, and incubated at 37°C. A line of Aedes albopictus (C6/36) cells was cultured in medium M199 with no HEPES and supplemented with FBS as above for growth or maintenance. The cells were incubated at 28°C in a humidified atmosphere in the presence of 5% CO2.

Details of the SINV isolates used in this study are listed in Table 1. Stocks of each virus were prepared in cell cultures by inoculating at a multiplicity of infection of one. Virions in the culture supernatant were concentrated by polyethylene glycol precipitation, purified by sucrose gradient centrifugation, and the virion RNA was extracted as previously described.5,9

Ten MAbs were prepared to SINV: three to the SW genotype strain SW6562 and seven to the 33130 strain from the O/A genotype using methods described previously.10 The isotype, protein specificity, and biologic activity of these MAbs were determined as previously described,11 and are listed in Table 2. Reference MAbs 11F4 and 2F2 were generously provided by TropBio Pty Ltd. (Townsville, Queensland, Australia). Monoclonal antibody 11F4 was previously shown to be alphavirus group-specific,12 while MAb 2F2, raised to the Australian prototype strain MRM39, was shown to be SINV-specific (Clancy P, 1991. Production and Application of Monoclonal Antibodies to the Australian Alphaviruses. MSc Thesis. School of Tropical Veterinary Science and Agriculture, James Cook University of North Queensland, Townsville, Queensland, Australia). Four additional reference MAbs (161, 2, 129, and 17C), raised to SINV prototype strain AR339,13 were a gift from Dianne Griffin (Johns Hopkins Bloomberg School of Public Health, Baltimore, MD). The reaction of each MAb with each SINV and SINV-like strain in this study was determined by enzyme-linked immunosorbent assay, as previously described.10

A single-tube reverse transcriptase–polymerase chain reaction (RT-PCR) procedure was performed on each SINV isolate using a protocol based on a previous study,14 using oligonucleotides designed from regions of SINV sequences taken from GenBank.15 Primer pairs were designed from each region (backward and forward primers) to amplify a 459 nucleotide region of the capsid gene. Specific details about oligonucleotide primers used to generate the sequence have been previously described.6 All sequencing of the PCR products was performed using the PRISM Dye Terminator Sequencing Kit (Applied Biosystems, Foster City, CA) and analyzed on a 373A automated sequencer (Applied Biosystems).

The consensus sequences were then aligned using the program Clustal W16 and phylogenetic data were generated using some of the programs in the PHYLIP package.17 Bootstrap random sampling was used to place confidence values on grouping within trees. The GenBank accession numbers for the sequences reported in this paper are AF035087 and AY22742-AY22744.

Several virus isolates were obtained from mosquitoes trapped in southern New South Wales between 1989 and 1990 using previously described methods.18 These viruses showed similar characteristics in suckling mice and cell cultures and were initially identified as alphaviruses by an indirect immunofluorescence assay using an extensive panel of arbovirus polyclonal typing reagents supplied by the U.S. National Institutes of Health (Bethesda, MD). Further typing of three of these viruses (1209, 1337, 1264) was performed by cross-neutralization with a panel of reference alphaviruses using previously described methods.19 Two-way cross neutralization of each test virus with WHAV provided a tentative identification as WHAV-like viruses (Table 3).

The sequences for 459 nucleotides in the capsid gene of the three WHAV-like virus isolates and the prototype WHAV (M78 strain) were obtained from viral RNA by RT-PCR and automated sequencing. These sequences were aligned and compared with corresponding sequences previously published for SINV strains from the P/E and O/A geographic regions (Sammels LM, 1995. Molecular Epidemiology of Ross River and Sindbis Viruses. PhD Thesis. The University of Western Australia, Nedlands, Perth, Western Australia).15,20,21 The nucleotide sequences of the four SINV strains from the SW genotype that we had previously obtained6 were also used in the alignments of the capsid gene.

Alignment of the nucleotide sequences in the capsid gene confirmed that the WHAV-like strains 1209, 1264, and 1337 were virtually identical to one another (>99% identity) and most closely related to the M78 strain of WHAV (>96% identity). These four viruses also shared a number of amino acid substitutions and two amino acid insertions in the capsid protein compared with prototype SINV (Figure 1). In contrast, there was significant nucleotide divergence between the three WHAV-like strains and the P/E (67–69% identity), O/A (66–67% identity), and SW (63–64% identity) isolates. The phylogenic tree constructed from the nucleotide sequence data obtained from the capsid gene (Figure 2) defined four clusters of SINV and WHAV-like viruses. Three corresponded to the P/E, O/A, and SW SINV genotypes. The fourth group (WHAV-like) included the prototype New Zealand WHAV strain M78 and the three WHAV-like strains isolated in New South Wales. Bootstrap analysis of nucleotide sequence data separated the viruses into the P/E, O/A, SW, and WHAV-like groups in all 100 randomly generated tests. Clustering of the three WHAV-like viruses with the M78 strain of WHAV occurred with 100% confidence. These results confirm the identity of isolates 1209, 1264, and 1337 as new strains of WHAV.

The three novel alphavirus isolates at the focus of this study were shown to share a high level of nucleotide sequence homology with each other (>99% identity) and with prototype WHAV (approximately 96% identity), consistent with their identification as a newly recognized strain of WHAV. These are the first Australian isolates of WHAV, which was originally isolated in 1962 in south Westland of New Zealand, near the township of Whataroa, and is thought to be maintained in mosquito-bird transmission cycles.22,23

The MAb binding studies also demonstrated antigenic similarity between prototype WHAV (strain M78) and the Australian WHAV isolates. However, two MAbs raised to the E2 protein of P/E SINV strain AR339 (129 and 2) and one to the E2 protein of O/A SINV strain 33130 (2A9) differentiated the three Australian WHAV isolates from the prototype virus, suggesting the former are antigenic variants of WHAV. The MAb binding patterns to the remaining SINV strains used in this study placed the viruses into three antigenic groups that correlated precisely with the genotypes identified by sequence comparisons. These MAbs will be valuable tools for the rapid identification and subtyping of new SINV and SINV-like isolates. A typing panel that included MAbs 2F2, 5H9, 3G7, 9A10, 2A9, 1C8, and 3A7 would be sufficient for this purpose.

The isolation of antigenic variants of WHAV from mosquitoes in New South Wales, approximately 3,000 km west of New Zealand, suggests the virus was introduced to Australia from New Zealand, possibly by migrating birds, and has evolved independently in the new habitat. The possibility that the virus was introduced from Australia to New Zealand prior to 1962 is a less likely scenario because regular arbovirus surveillance programs in Australia over several decades have found no evidence of the virus prior to 1989 or since 1990.

Three distinct genetic lineages of SINV or WHAV have now been shown to occur in Australia. One of these, the O/A SINV genotype, circulates in bird-mosquito transmission cycles throughout the continent as well as in Papua New Guinea, and Sarawak, Malaysia. In contrast, the other two lineages (the SW SINV genotype and the new WHAV strain) appear to be restricted to discrete geographic areas located in southwestern Australia and southern New South Wales, respectively. To understand the ecology and epidemiology of these viruses, including the identification of their vertebrate hosts and arthropod vectors, further investigations are required.

Details of the virus isolates used in this study

Properties of monoclonal antibodies used in this study*