a, Scatter plot of water table depth (WTD) one-half month prior versus WTD four months prior at all 42 sites in southcentral Florida, 1990–1998. Blue circles denote county-months with no human cases of St. Louis encephalitis (SLE) and red circles denote county-months with one or more cases of SLE. More than one site may exist in a county. b, Same scatter plot as in Figure 1a. Red circles now randomly selected from among the meteorologic stations.

Map of modeled water table depth (WTD) for August 16–31, 1990 at all 42 station sites in the study area. Location of the September 1990 human cases of St. Louis encephalitis (SLE) is also shown. 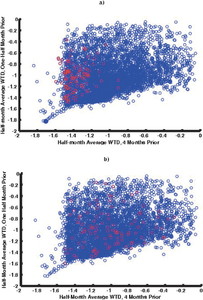 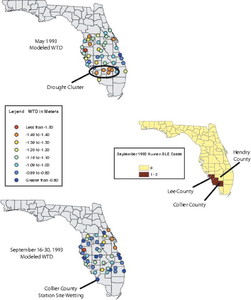 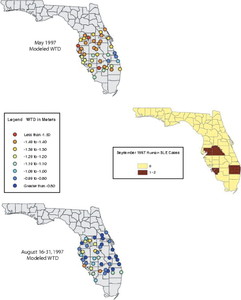 THE SPATIAL-TEMPORAL DISTRIBUTION OF DROUGHT, WETTING, AND HUMAN CASES OF ST. LOUIS ENCEPHALITIS IN SOUTHCENTRAL FLORIDA

Using a dynamic hydrology model, we simulated land surface wetness conditions at 42 sites in 28 counties in southcentral Florida from 1990 to 1998 and compared these simulations with the incidence of human cases of St. Louis encephalitis (SLE) within these counties. Within counties, drought four months prior and wetting one-half month prior were significantly associated with human cases of SLE. Simulated land surface wetness conditions resolved transmission loci in both space and time, and May drought was significantly associated with the subsequent occurrence of human SLE cases. These findings are consistent with previous results associating simulated land surface wetness conditions with the transmission of SLE virus as measured in sentinel chickens, and support our working hypothesis that springtime drought facilitates SLE virus amplification in mosquito and wild bird populations.