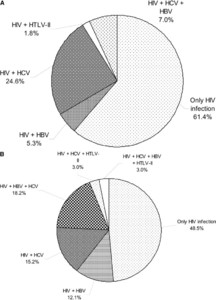 Infections with hepatitis C virus, (HCV), hepatitis B virus (HBV), and human T lymphotropic type I/II (HTLV-I/II) virus are commonly found in patients infected with human immunodeficiency virus type 1 (HIV-1). We conducted a seroepidemiologic study among 174 HIV-positive heterosexuals in Buenos Aires, Argentina in 1999. Evidence of exposure to HCV, HBV, and HTLV-I/II was found in 32%, 17%, and 5%, respectively. A higher prevalence of HBV infection was observed among males (33%) compared with females (12%; P < 0.05). Among women, a prior history of a sexually transmitted infection, injecting drug use (IDU), having had more than five lifetime sex partners, and having exchanged sex-for-goods were significantly associated with HCV infection, whereas an IDU history, syringe sharing, and having exchanged sex-for-goods were found to be associated with HBV infection. Among men, an IDU history and syringe/needle sharing were significantly associated with HCV infection. The IDU-related and sexual transmission of hepatitis viruses constitute a significant problem among young, HIV-infected, heterosexuals in Argentina.

Sexual exposure, parenteral inoculation, blood transfusions, and vertical infection are the principal routes of transmission for human immunodeficiency virus type 1 (HIV-1). Infections with hepatitis C virus (HCV), hepatitis B virus (HBV), and human T lymphotropic virus type I/II (HTLV-I/II) are commonly found in HIV-1-infected patients due to shared modes of transmission. Nevertheless, the reported seroprevalence has been variable depending on geographic regions and risk groups. Hepatitis C virus is transmitted primarily by exposure to infected blood. However, in nearly half of the cases, the transmission route cannot be identified and other transmission routes such as sexual and household exposures to infected contacts cannot be ruled out.1,2

Infection rates for HBV rates vary widely throughout the world. In some areas, such as southeast Asia, Africa, and China, more than 50% of the population is found to be infected. In contrast, low endemicity of infection is found in areas such as western Europe and Australia where carrier prevalence rates of less than 1% have been documented.5,6 This virus has been detected in semen, saliva, and nasopharyngeal fluids, and can be transmitted both sexually and by exposure to infected blood.7 The number of reported cases has decreased sharply since the mid to late 1980s as a result of universal screening and vaccination of pregnant women and newborns, as well as standardized screening of blood donors.

Human T lymphotropic virus type I/II is transmitted sexually, vertically from mother-to-child, and parenterally. The epidemiology of these infections is rather unique and is characterized by extreme geographic restriction and focal, high levels of endemicity in specific regions of the world. Human T lymphotropic virus type I (HTLV-I) has a worldwide distribution, but appears to be endemic in the southwestern islands of Japan, the Caribbean, Melanesia, the Seychelle islands, some areas of Africa, and Latin America.8 Conversely, HTLV-II has been reported to affect mainly Amerindians and injecting drug users.9–11 In Argentina, HTLV-I/II infections also appear to be geographically restricted to areas in the northwest province of Jujuy (for HTLV-I) and in the northern (Chaco region) among Toba and Wichi aboriginal tribes.12–16

The objective of this cross-sectional study was to determine the seroprevalence of HCV, HBV, HTLV-I/II, and associated risk factors in a heterosexually active, young population of HIV-infected individuals in city area of Buenos Aires, Argentina.

Written informed consent was obtained from all participants in the study. Human use ethical guidelines of the U.S. Department of Health and Human Services, U.S. Department of Defense, and individual institutions were followed. Plasma specimens were obtained from a convenience sample of HIV-infected subjects who were seen at the National AIDS Reference Center Laboratory (Buenos Aires, Argentina) to monitor their viral load and CD4+ lymphocyte count during the period of April through August 1999. Subjects included pregnant females and females who had delivered in the previous 12 months, as well as their male sex partners. Information regarding sociodemographic characteristics and sexual practices was obtained by way of confidential administration of a questionnaire as previously described17; all information was obtained by a professional social worker with extensive training and experience in sexually transmitted infection (STI) counseling and prevention.

Comparisons of proportions between infected and non-infected individuals were analyzed using parametric and non-parametric statistical methods. Univariate analyses of sexual transmission factors, demographic characteristics, and high-risk IDU practices were performed by use of chi-square and Fisher’s exact tests. Means were compared by the Mann-Whitney’s test. Estimates of relative risk were obtained by calculating odds ratios (ORs) and associated 95% confidence intervals (CIs). Age- and sex-adjusted odds ratios (AORs) were computed using multivariate conditional logistic regression modeling methods. Variables whose AOR was found to be significantly greater than 1.5 on this initial analysis were then included in a forward stepwise logistic regression model.

A total of 174 HIV-infected, heterosexually active subjects were included in this study; 133 were females and 41 were male sex partners. The mean ± SD age for all the population was 27.2 ± 5.2 years (range = 18–45), 26.4 ± 4.9 years (range = 18–40) for women and 29.7 ± 5.4 years (range = 20–45) for men. The general characteristics of the study population are shown in Table 1. Most (62.7%) of the participants were between 20 and 29 years of age. Approximately two-thirds (64.9%) had completed elementary school. Most (82.9%) men had temporary jobs whereas most women (78.0%) were housewives. Forty-nine women were pregnant and 84 had delivered within the previous 12 months of study enrollment. More than 85% of the females had learned about their HIV-positive status prior to or while pregnant; the remainder (12.8%) had learned about their HIV-infected status due to an adverse HIV-related disease outcome in a family member.

Use of illegal drugs, by any route, was reported in 45.4% of all subjects and was more frequent among men than women. Marihuana and cocaine were the most frequently used drugs. Current IDU was also found to be more prevalent among men (41.5%) than women (15.0%) and virtually all injecting drug users reported sharing needles or syringes (90% of the women and 95% of the men).

An STI history was reported by approximately one-fifth of study subjects. Episodes of STIs were more frequently observed in men than in women, with syphilis being the most frequently reported condition.

Irregular condom use (i.e., never or sometimes) with steady partners was reported by approximately two-thirds of the individuals, and, among men, irregular use of condoms with casual partners was reported in 90% of the cases (P < 0.05). Inconsistent condom use was also found to be significantly more frequent among sexual partners who used illegal drugs (76.1%) when compared with those who did not (56.5%; P < 0.05). In addition, the use of illegal drugs in women was most frequently detected when the male sexual partner also declared such use.

Only five (12.2%) of the 41 men reported having had sex with other men. Sexual relations with foreigners were reported by only 22.4% of the subjects and was found to be more frequent in men than in women. Most of these foreign contacts were from neighboring countries and very few contacts occurred with people living outside of South America. The number of different sex partners was significantly greater for men than women; almost 70% of the men compared with only one-fourth of the women reported five or more lifetime sex partners.

An association was found between a history of exchange of sex for money, drugs, or food and use of illegal drugs (P < 0.005). Use of illegal drugs was also found to be more prevalent among men who were less educated (86.7%) when compared with those with high school or greater level of education (45.5%; P < 0.05). A statistically significant association was also found between an IDU history and a history of a previous STI; those who reported an IDU history were more likely to have sustained an STI (52.9%) compared with those who had never used injecting drugs (12.5%; P < 0.05).

Analysis of risk factors for HCV infection among women.

Analysis of risk factors for HCV infection among men.

Our study findings clearly indicate that HIV-infected heterosexual men and women were found to be at high-risk of viral co-infections, as illustrated by the high HCV, HBV, and HTLV-I/II prevalence rates of infection detected (32.1%, 16.9%, and 4.6%, respectively). Infection with these viruses was significantly higher than the infection rates experienced by a comparable group of healthy adult volunteer blood donors in Argentina (0.74%, 1.03%, and 0.29%, respectively).18,19 Illegal drug use appears to be the common factor that increases risk of infection with these viruses. More than three-fourths (76%) of the men and one-third (36%) of the women exhibited this high-risk behavior.

Pathogen-specific analysis showed that the high prevalence of HCV is strongly associated with the use of illegal drugs, particularly with a history of IDU and syringe/needle sharing, a finding that has also been previously well documented in the United States and Europe.20,21 Even in cases where an IDU high-risk behavior was not reported (47% of HCV-positive individuals), we found a significant proportion of subjects who reported having had an IDU partner (43%) and/or an HCV-positive sexual partner (71%). For the minority of cases, where no IDU high-risk behavior was reported, sexual intercourse seems to be the only potential risk factor. Co-infections with HBV and HTLV-II were also associated with an IDU history, but to a much lesser extent than for HCV infection.

It has been previously suggested that the presence of HIV infection results in increased HCV viral loads, presumably secondary due to unopposed viral replication as a result of HIV-mediated immunosuppression.22 In general, subjects with HIV and HCV co-infections demonstrate higher levels of serum and liver HCV RNA than patients who have only an HCV infection.23,24 It is very likely that the presence of HIV infection makes HCV transmission more efficient, both sexually and perinatally.25

Transmission has also been directly correlated with the degree of immunosuppression and viral load.25 While current evidence indicates that sexual transmission of HCV in immunocompetent individuals occurs rarely, if at all, this likely does not apply to the cases where the persons are HIV infected, where transmission is more efficient and may significantly contribute to the incidence of HCV infection. This may be the reason for the high HCV prevalence in women without an IDU history, but, who had IDU partners.

Illegal drug use is a global phenomenon. The United Nations Office on Drugs and Crime has estimated that the total number of drug users worldwide is approximately 185 million people, equivalent to 3.1% of the global population. Cocaine use has been estimated to affect 13.4 million (0.3%) of the global population. In South America, the prevalence of cocaine use has been estimated at approximately 1.0% with Argentina having the highest prevalence (1.9%) in the region.26 This trend shows that drug use is a major problem in the country compared with other countries in the region. Worldwide, the preferred modes of intake of cocaine are via sniffing, injection, smoking, or inhalation. Between 5% and 10% of all HIV/AIDS cases are estimated to be injecting drug users. In many Latin American countries, the spread of HIV through the sharing of injecting drug equipment is a growing concern. Injecting drug users, mostly cocaine injectors, account for an estimated 40% of reported HIV infections in Argentina. In the neighboring country of Uruguay, it is approximately 28%. If partners of injecting drug users are included, proportions of drug-related HIV are even more significant.

The high prevalence of hepatitis (HCV and HBV) and human T lymphotropic virus (HTLV) infections detected in this population highlights the need to ensure universal screening of pregnant women for HBV, HCV and, possibly, HTLV-I/II infections to prevent mother-to-child transmission of these blood-borne viruses. Strong national policies requiring the routine screening of pregnant women need to be established by governmental and public health authorities in Argentina, given the documented high-level of infection found among young females in our study. Such policies are already in effect in other developed countries, such as the United States.32–35