Western blot analysis of the cysteine proteinase of Paragonimus westermani (PwCP2) by A, staining with Coomassie blue and B, Western blotting. Lane 1, crude extract; lane 2, excretory-secretory product of P. westermani; lane 3, recombinant PwCP2 (rPwCP2). The proteins were separated by sodium dodecyl sulfate-polyacrylamide gel electrophoresis on a 12% polyacrylamide gel and stained with 0.25% (w/v) Coomassie blue staining solution (A) or transferred to a nitrocellulose membrane for Western blotting (B) with rPwCP2 antiserum described in the Materials and Methods. The upper and lower arrows indicate the immature and mature form of PwCP2, respectively.

Localization of the cysteine proteinase of Paragonimus westermani (PwCP2) in the adult worm. Immunohistochemical staining of PwCP2 was performed with uninfected mouse serum (A and C) and recombinant PwCP2 antiserum (B and D) described in the Materials and Methods. Note that PwCP2 was expressed mainly in the intestinal epithelium of the P. westermani adult worm (indicated by the arrows in B and D). I = intestine. (Magnifications × 200 in A and B and × 40 in C and D.)

Enzyme-linked immunosorbent assay (ELISA) using the recombinant cysteine proteinase of Paragonimus westermani (rPwCP2) in sera from rats infected with metacercariae of P. westermani. After an ELISA plate was coated with rPwCP2 (50 ng/well) at 37°C for two hours, it was incubated with rat sera (1:800 dilution) infected with P. westermani metacercariae (I, n = 30) or preimmune sera (1:800 dilution) before infection (PI, n = 30) and then with peroxidase-conjugated anti-rat IgG antibody (1:15,000 dilution). The absorbance was measured at 450 nm with a 650-nm reference filter. Each point represents the mean ± SD of triplicate experiments. The cut-off value (horizontal line) was determined as the mean + 2 SD (0.10) in uninfected rat sera. 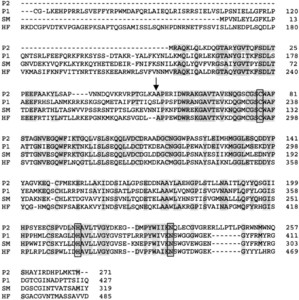 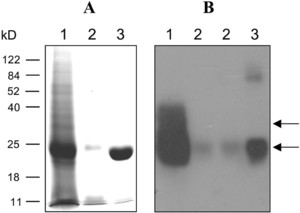 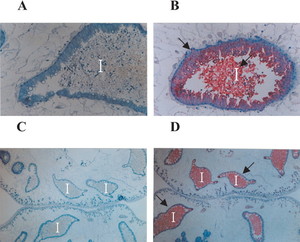 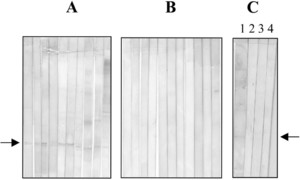 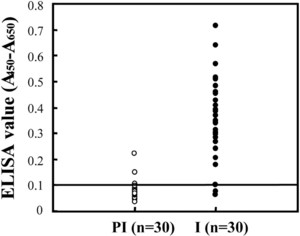 The cysteine proteinases of Paragonimus westermani are known to play important roles in invasion and pathogenesis to hosts and in immune modulation and nutrient uptake. In this study, we have cloned a new cysteine proteinase of P. westermani, PwCP2, from adult worms and tested its diagnostic usefulness. The PwCP2 gene had an open reading frame of 816 base pairs and a conserved catalytic triad of cysteine, histidine, and asparagine residues. The mature form of recombinant PwCP2 (rPwCP2) lacking a proregion was overexpressed in Escherichia coli and used to produce antiserum. Western blot and immunohistochemical analyses using this antiserum showed that PwCP2 was expressed as a mature form, 24-kD product in a crude extract and in the excretory-secretory product of P. westermani, and was localized mainly in the intestinal epithelium of the adult worm. Western blot analysis using the rPwCP2 showed not only high sensitivity (90%) and specificity (100%) to sera from patients with paragonimiasis westermani, but also no cross-reactivity with sera from patients with clonorchiasis, sparganosis, or cysticercosis. Furthermore, an enzyme-linked immunosorbent assay using rPwCP2 exhibited a sensitivity of 93% and a specificity of 93% with sera of rats infected with P. westermani metacercariae. These results suggest that the excretory-secretory PwCP2 can be used for the diagnosis of paragonimiasis.