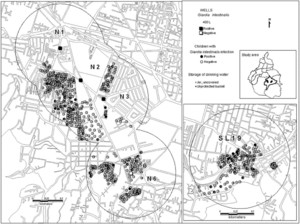 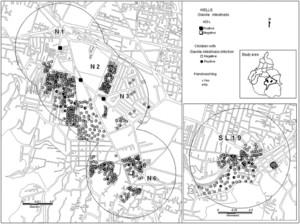 The objective of this study was to assess the risk of infection with Giardia intestinalis in children living in an area with artificial groundwater recharge and potable water reuse in Mexico City. Eligible wells and surrounding homesteads were defined by using a geographic information system. Five wells were tested for G. intestinalis cysts per 400 liters of water. A total of 750 eligible households were visited during two cross-sectional surveys. Stool samples were provided by 986 children in the rainy season study and 928 children during the dry season survey for parasitologic tests. Their guardians provided information on water, sanitation, hygiene, and socioeconomic variables. The prevalence rates of G. intestinalis infection were 9.4% in the rainy season and 4.4% in the dry season. Higher rates of infection were observed in older individuals (9.5% and 10.6%) and girls had a lower risk of infection than boys (odds ratio [OR] =0.55, 95% confidence interval [CI] = 0.34, 0.88 in the rainy season and OR = 0.47, 95% CI = 0.25, 0.90 in the dry season). During the wet season survey, a health risk was detected among those storing water in unprotected receptacles (OR = 4.00, 4.69, and 5.34 for those using uncovered jars, cisterns or tanks, and buckets, respectively), and bathing outside the dwelling, i.e., using a tap (OR = 1.93, 95% CI = 1.10, 3.39). A health risk was also detected among children from households with unsafe food hygiene practices (OR =2.41, 95% CI =1.10, 5.30) and those with no hand-washing habits (OR = 2.27, 95% CI = 1.00, 5.20). Groundwater reserves are at risk of fecal pollution, as indicated by the presence of G. intestinalis cysts. However, the endemic pattern of intestinal infection reflects low standards of personal hygiene and unsafe drinking water storage and food-related practices at household level. Prevention activities must address health education and environmental protection policies.