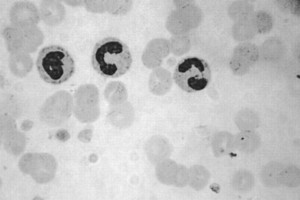 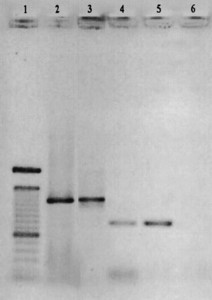 We report a case of a 56-year-old man with a history of splenectomy for idiopathic thrombocytopenic purpura who developed persistent bacteremia in the acute phase of human bartonellosis. This patient did not develop hemolytic anemia. Only after several courses of antibiotic treatment was the infection eradicated. This is an unusual case of overwhelming post-splenectomy infection by Bartonella bacilliformis, which provides clinical evidence that the spleen is a critical effector organ of clearance of this infection as well as the effector organ of bartonellosis-associated hemolytic anemia.

Carrion’s disease (bartonellosis) is an infectious disease that is endemic in some regions of Peru, Colombia, and Ecuador.1 The etiologic agent is Bartonella bacilliformis. There are two clinical phases of the infection: an acute phase known as Oroya fever, which is characterized by bacteremia, fever, severe hemolytic anemia, and transient immunosuppression, and an eruptive phase known as Verruga Peruana or Peruvian wart. In endemic areas, the incidence of infection is estimated to be 12.7/100 person-years.2 Limited information on the immunologic response to Bartonella infection exists, but it is widely accepted that antibodies are responsible for acquired long-term, protective immunity. However, the presence of chronic asymptomatic carriers in endemic areas and the appearance of the chronic phase contribute to the speculation that innate immunity and humoral immunity may not be completely effective in clearing Bartonella infection.3 This hypothesis would imply that humans may be natural reservoirs, allowing for vector transmission of the disease.2 Otherwise, cellular immune response could be fundamental in the clearance of this bacterium.

We report an unusual case of overwhelming post-splenectomy infection (OPSI) with B. bacilliformis and discuss the circumstances of this persistent bacteremia, the clinical course, and the role of the spleen in the clearance of this infection and in the hemolytic anemia associated with the disease.

A 56-year-old man with a history of a splenectomy performed 20 years ago because of idiopathic thrombocytopenic purpura was admitted to the Cayetano Heredia Hospital in Lima, Peru complaining of fever. He had worked for two months in an area endemic for bartonellosis (Ancash, Peru). Six weeks before admission, being previously asymptomatic, he had an abrupt onset of fever, malaise, weakness, and myalgia. He presented at a health center where acute bartonellosis was diagnosed by a thin blood smear. He was treated with chloramphenicol for two weeks and the symptoms resolved. Four weeks later, the symptoms returned and he was admitted to the Cayetano Heredia Hospital in Lima, Peru with fever, chills, weakness, myalgia, tachypnea, headache, and malaise. He had not been vaccinated against Streptococcus pneumoniae or Haemophilus influenzae.

On admission, he had a temperature of 39°C, a pulse rate of 120/minute, a respiratory rate of 30/minute, and a blood pressure of 110/50 mm of Hg. On physical examination, his abdomen had a scar in the middle line. The skin was warm and moist. The results of the rest of the physical examination were normal.

Results of laboratory tests performed are shown in Table 1. Results of urinalysis and a chest radiograph were normal. A Giemsa-stained blood smear showed bacilli infecting more than 90% of his red blood cells (Figure 1). A polymerase chain reaction test for B. bacilliformis in whole blood was positive using primers for the 16S and 23S rRNA ITS region and for the citrate synthase gene (Figure 2).4 An immunoblot serum test result for IgG was also positive.5 After two weeks, colonies morphologically consistent with B. bacilliformis were observed in a Columbia blood agar culture.

The patient received ciprofloxacin (500 mg orally twice a day) with resolution of symptoms approximately 12 hours after the first dose. The patient was discharged after one week of hospitalization with a negative blood smear and treatment for three additional days. One week following the last dose of ciprofloxacin, he was admitted to the outpatient clinic with a positive blood smear for B. bacilliformis. Ten percent of his red blood cells were infected. He was not in an endemic area during this time. Ciprofloxacin was prescribed for two additional weeks with symptomatic relief. Another blood smear was negative.

At the third week, he presented with malaise, fever, and chills with a new positive blood smear, again with 10% of his red blood cells infected. He received a third course of ciprofloxacin (500 mg orally twice a day) for two weeks. The symptoms disappeared three days after the first dose and treatment was continued at a dose of 250 mg per day for one month. A new culture and smear were negative for Bartonella. The patient has not relapsed in two years of follow-up.

This is the first report of persistent symptomatic bacteremia caused by B. bacilliformis in a splenectomized patient, as demonstrated by microbiologic, immunologic and molecular techniques.

During the acute phase of illness, our patient developed classic clinical symptoms of bartonellosis, with the exception of hemolytic anemia. The rapid development of anemia in Carrion’s disease occurs during the acute phase, when physical damage to the membranes of red blood cells and exposure of Bartonella antigens stimulate the reticuloendothelial system to engulf red blood cells. This causes an intense erythrophagocytosis that results in the characteristic severe hemolytic anemia and jaundice. The differential diagnosis of this presentation includes malaria, hepatitis, leptospirosis, and yellow fever, among others.6 The percentage of erythrocytes parasitized by Bartonella in our patient was more than 90% on initial presentation and 10% with each subsequent relapse despite antibiotic treatment with ciprofloxacin, which is the preferred treatment for severe cases of acute bartonellosis based on our clinical experience. However, there are no randomized clinical trials regarding antibiotic effectiveness for treatment of this disease. Bartonella is sensitive to some antibiotics, but drug resistance has been recently reported.7

The lack of an intact spleen explains the clinical and microbiologic findings of persistent bacteremia despite the absence of hemolysis. This defect in erythrophagocytosis underscores the importance of the spleen in the clearance of the bacteria during the acute phase of the disease, as well as the pathogenesis of acute hemolysis.

The role of the spleen in providing sterilizing immunity against Bartonella infection is not known. Infected patients have an increase in the index of sequestration of red blood cells by the liver and spleen.8 Due to its structure, one major function of the spleen is to destroy or remodel defective or old red blood cells through filtration with and without destruction of these cells. The spleen is also known to be responsible for clearance of infective organisms, particularly encapsulated bacteria as well as red blood cell–associated organisms such as Plasmodium spp. and Babesia spp.9 Surgical removal of the spleen results in reduced clearance of particulate antigens, impaired phagocytosis of unopsonized and opsonized bacteria and cells, and susceptibility to severe infections from these organisms.10 Asplenic individuals are thus vulnerable to sepsis caused by bacteria and protozoa. Such infections are often fulminant, with high mortality. In the case of malaria infection, asplenic patients are more commonly parasitemic and have delayed clearance of parasites after treatment.11 The most common infecting organisms in potentially fatal infections are S. pneumoniae, H. influenzae type b, Neisseria meningitides, and Capnocytophaga spp. Although there is a risk of infection in splenectomized patients, most of those afflicted do not receive adequate advice or interventions to reduce the risk of OPSI.12 Preventive measures in asplenic patients traveling to endemic areas for Bartonella, such as personal care, can be effective to avoid underlying complications.

There are no data regarding OPSI by B. bacilliformis in humans. Anecdotal experimental studies using splenectomized dogs and monkeys infected with Bartonella reproduced the anemic phase with fluctuant bacteremia, followed by death.13 Splenectomy in the animal model was found to play an important role in the spread of the infection with lethal results, but not in erythrophagocytosis. Host resistance to foreign organisms is affected by trapping parasitized cells in the splenic cords.9 We believe that the spleen is the principal lymphoid organ implicated in the immunologic recognition of Bartonella in Carrion’s disease. Thus, anemia can be the result of a splenic cell-mediated immune response to B. bacilliformis infection, producing a red pulp-mediated red blood cell destruction of infected erythrocytes. Further immunologic, epidemiologic, microbiologic, and pathologic studies are necessary to understand the pathways and interactions of Bartonella with the susceptible host.