Map of Kazakhstan showing the nine sites of human anthrax outbreaks between 1997 and 1998. The asterisks indicate outbreaks that were not investigated as part of the cohort study. 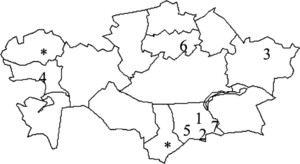 A retrospective cohort analysis was conducted in Kazakhstan to define modifiable risk factors during seven outbreaks of human anthrax. Fifty-three cases and 255 non-ill persons with an epidemiologic link to an infected animal were enrolled. Cases were 58% male and had a median age of 35 years (range = 5–71). Nearly all cases had cutaneous disease (96%). Two patients (4%) were diagnosed with gastrointestinal disease. Although all cases had some contact with an infected animal other than consumption, in multivariable analysis the act of butchering an animal (relative risk [RR] = 3.6, 95% confidence interval [CI] = 1.5–9.6) and the presence of visible cuts on the hands were associated with anthrax (RR = 3.0, 95% CI = 0.9–9.6). Contact with infected livestock, in particular butchering, is associated with developing anthrax. The risk may be exacerbated by the presence of cuts on the hands at the time of contact with the animal or animal products.