Map of Mindoro Island, The Philippines. The study sites of Bayanan and Mangangan are small villages located southwest of the capital city of Calapan, near the foot of Mount Halcon. Study sites (area outlined in gray) are enlarged in Figure 2 to show distribution of households.

Map of the neighboring barangays (villages) of Bayanan and Mangangan, showing similarities in distribution of households, paths, their proximity to one another, and the higher elevations of Mount Halcon. SDA = Sitio Department Administration.

Census results including sex distribution in different age (years) groups for all the residents in the two villages with a combined population of 3,220. Bayanan: n = 1,237; Mangangan: n = 1,983

Sex-specific microfilarial positivity rates in different age (years) groups from the neighboring villages of Bayanan and Mangangan. Thirty-four subjects in Bayanan (22 males and 12 females) and 10 subjects in Mangangan (5 males and 5 females) were found to harbor microfilaria in their blood. 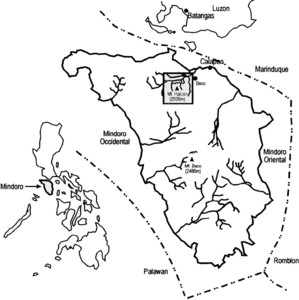 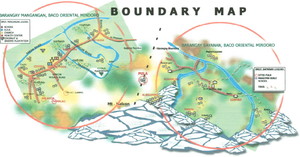 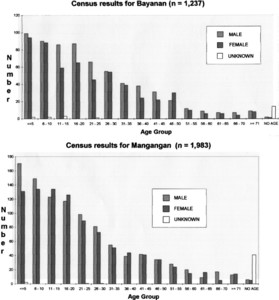 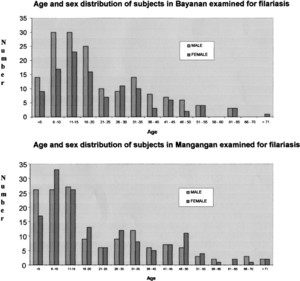 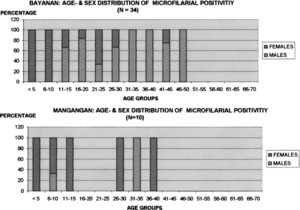 Lymphatic filariasis caused by infection with Wuchereria bancrofti and Brugia malayi is endemic in 45 of 77 provinces in The Philippines. To prepare the island of Mindoro for mass treatment using diethylcarbamazine and albendazole, complete census data were collected in rural villages. A sample of individuals selected from each of two adjacent villages was examined for microfilaremia. Microfilariae were detected from thin smears in 34 (13%) of 272 patients examined from the village of Bayanan and 10 (3.4%) of 292 in the village of Mangangan (P < 0.01, by chi-square test). In these villages, the majority of those infected were members of the ethnic group known as Mangyans: 33 (97%) of 24 in Bayanan and 7 (70%) of 10 in Mangangan (risk ratio = 89, 95% confidence interval = 33–240, P < 0.001.) In children examined who were less than 10 years of age (n = 165), girls were more commonly infected than boys, even though the proportion of males in the general population was greater. Understanding sociocultural characteristics and related behaviors in future observations among the Mangyan may help to explain local differences in the distribution of filariasis. This information should also be helpful in designing more culturally appropriate strategies for the control of lymphatic filariasis among ethnic minorities in The Philippines.