Viral load of saliva, as estimated by a quantitative reverse transcriptase-polymerase chain reaction. The boundary of the box closest to zero indicates the 25th percentile, a line within the box marks the median, and the boundary of the box farthest from zero indicates the 75th percentile. Whiskers above and below the box indicate the 95th and 5th percentiles. Day 14 values are significantly (P = 0.0025) higher than day 21 values. PFU = plaque-forming units; WNV = West Nile virus. 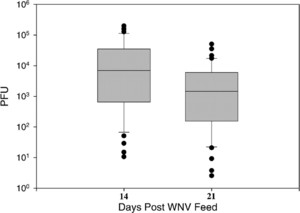 Transmission experiments are a critical component of vector competence studies. In this study, a real-time reverse transcriptase-polymerase chain reaction (RT-PCR) was used to enumerate the amount of West Nile virus (WNV) secreted in mosquito saliva following oral infection. Culex pipiens quinquefasciatus were allowed to feed on WNV-infected blood, and saliva was collected on days 14 and 21 post-infection (pi). The amount of virus at these two time points varied significantly, with mean equivalent plaque-forming units (pfu) of approximately 30,500 on day 14 pi and 5,800 on day 21 pi. Individual mosquitoes secreted up to 2 × 105 pfu of virus. Titer of whole mosquitoes and immunofluorescence assay of salivary glands from mosquitoes collected at these two time points were also used for supplemental comparison. This report describes the first use of a real-time RT-PCR to quantify the amount of WNV in mosquito saliva.