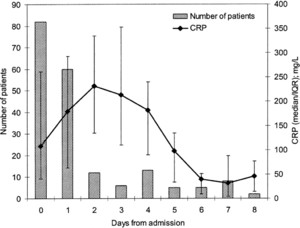 C-REACTIVE PROTEIN IN THE DIAGNOSIS OF MELIOIDOSIS

Previous work suggested that C-reactive protein (CRP) may be a useful test in the diagnosis of melioidosis, the infection caused by Burkholderia pseudomallei. We reviewed patients with culture-confirmed melioidosis to define the role of this inflammatory marker in the diagnosis of melioidosis. In 175 patients, we found that the admission CRP level may be normal or only mildly elevated, including patients with severe sepsis, fatal cases, and in relapsed melioidosis. In a multivariate analysis, sepsis and bacteremia were more strongly associated with mortality than CRP. Admission levels of CRP are not a sensitive marker for the presence of melioidosis and a normal level cannot be used to exclude acute, chronic, or relapsed melioidosis in febrile patients in or from endemic regions.

Melioidosis, which is caused by the environmental organism Burkholderia pseudomallei, is an infection endemic in Southeast Asia and northern Australia.1 Its clinical features vary from a fulminant septic illness associated with a high mortality to a chronic progressive disease. Relapse following apparently successful therapy is well recognized. Pneumonia and infections of the genitourinary tract and intra-abdominal organs are the most common sites of infection. Interest in this disease has increased with the recognition of this bacterium as a potential bioweapon.

Serum C-reactive protein (CRP) is a simple, rapid marker of the acute phase reaction that is elevated in inflammatory reactions and tissue damage. It is a commonly used clinical marker of bacterial sepsis as well as non-infectious inflammatory states such as rheumatoid arthritis.2–4 A previous study demonstrated that CRP levels were a sensitive marker for clinical melioidosis, with all patients demonstrating significant elevations in levels.5

Since our clinical experience suggested otherwise, we wished to review the utility of serum CRP levels in the diagnosis of melioidosis in our large series and its role as a prognostic marker for mortality.

Patients with culture-confirmed melioidosis in the endemic “Top End” of the Northern Territory of Australia have been studied prospectively since October 1989. Treatment followed established protocols:6 an intensive phase of trimethoprim/sulfamethoxazole (TMP-SMX) with intravenous antibiotics (mostly ceftazidime but more recently meropenem in critically ill patients) for at least 14 days, followed by an eradication phase of oral antibiotics (usually TMP-SMX) for at least three months.

Assays for serum C-reactive protein (Ortho-Clinical Diagnostics; Johnson and Johnson, Rochester, NY) were performed at the Royal Darwin Hospital with a normal range of less than 7 g/mL (0.7 mg/dL). We defined mildly elevated as a level between 7 and 50 mg/L because this range may have resulted in clinical uncertainty as to its significance.

Statistical tests were performed using Intercooled Stata version 7.0 (Stata Corp., College Station, TX). Since the distribution of CRP levels was skewed, a Mann-Whitney non-parametric U test was performed to compare groups for univariate analysis. Candidate variables identified at the 0.05 significance level were considered together for multivariate regression analysis where CRP levels were considered in quartiles. Ethical clearance for this study was obtained from the Human Research Ethics Committee of the Menzies School of Health Research and the Northern Territory Department of Human Services.

Of 344 patients with culture-confirmed melioidosis presenting between December 1989 and September, 2002, 218 patients had CRP levels determined during hospital admission and 175 patients had CRP levels determined within 48 hours of admission. Of the 175 patients, 92.6% had acute melioidosis and 7.4% had chronic melioidosis. The proportions of patients with pneumonia (55.4%) and abscesses of the prostate gland, liver, or spleen (20.6%) were representative of the wider group,6 including those who did not have CRP levels measured on admission or during admission.

Patients with chronic melioidosis had a lower median CRP level. Since this represented a different clinical manifestation, we considered only patients with acute melioidosis in the multivariate analysis. Multivariate regression suggested that only severe sepsis, bacteremia, and the presence of pre-existing chronic obstructive airways disease were associated with a higher quartile CRP level.

Of the 20 patients who died during this study, one (5%) had a normal CRP level and three (15%) had mildly elevated CRP levels. Patients who died had higher median CRP levels, but in a multivariate analysis adjusting for the presence of severe sepsis and positive blood cultures, this was no longer significant, with the presence of severe sepsis most strongly associated with mortality. In patients with the highest quartile CRP levels, the mortality was 25.6%, higher than in the other quartiles (7.0%).

When we considered serial CRP levels in the 218 patients who had CRP levels determined during hospital admission, the median CRP level tended to increase in the first few days before decreasing after 6–8 days (Figure 1). Smaller numbers within subgroups precluded meaningful analysis, but a similar pattern was observed when comparing patients with pneumonia and patients with internal conditions such as prostatic, hepatic, or splenic abscesses.

C-reactive protein, an acute phase protein, is synthesized by hepatocytes mainly in response to interleukin-6 (IL-6)2 and acts as an opsonin, binding to polysaccharides and other molecules present in many pathogens. The secretion of CRP begins within 4–6 hours of an inflammatory stimulus and may peak at levels up to 1,000 times above the normal range after 36–50 hours.3 Levels of CRP are a commonly used clinical tool in the diagnosis and monitoring of bacterial infection, with an emerging role being defined in ruling out severe infection in different settings.3,8

In the only previous clinical study of CRP in melioidosis, the serum CRP level was reported to correlate with disease severity.5 In all 46 patients with clinical melioidosis, which included 33 culture-confirmed cases, serum levels of CRP were greater than 50 mg/L at the time of diagnosis. In the majority of patients with an uncomplicated course, CRP levels decreased after two days of treatment and reached normal levels after a mean time of 29 days (range = 12–52 days). Persistent elevation in four patients was attributed to undiagnosed sites of infection or inadequate treatment. Relapse was described in three patients and was associated with elevated CRP levels in the absence of fever or an elevated white blood cell count. A similar study by Smith and others in Thailand found that levels of another inflammatory marker, procalcitonin, were not sensitive for mild disease, but were invariably elevated in severe melioidosis, and even higher in patients who ultimately died.9

This larger study, involving only patients with culture-confirmed melioidosis, demonstrates that although CRP levels generally reflect the severity of infection, they are not a sensitive measure for this serious infection and cannot be relied upon to exclude the presence of this disease, mirroring studies examining the role of CRP in serious infections in children and adults.10–12 Even among patients with severely septic presentations and patients who ultimately died, a significant proportion had CRP levels in the normal or mildly elevated range. Similarly, when considered as a tool for detecting relapsed disease, a significant proportion did not have significant elevations of CRP within 48 hours of their second presentation.

The longitudinal analysis of CRP levels following admission should be interpreted with caution because there may be a significant testing bias operating, particularly following the immediate admission period. We found that CRP levels decreased to mildly elevated levels over the first week of therapy. Another limitation of our study is that we were unable to control for duration of illness prior to presentation apart from acute and chronic presentations.

Levels of IL-6, the stimulus for CRP production, are elevated in infection with B. pseudomallei along with those of pro-inflammatory cytokines such as tumor necrosis factor and IL-8.13 A study of 172 Thai adults with melioidosis showed that IL-6, IL-10, and acute physiology and chronic health evaluation Acute Physiology and Chronic Health Evaluation version 2 score were all independently associated with mortality.14 We found that although the highest quartile of CRP was associated with a higher mortality, this was not an independent predictor when adjusted for the presence of severe sepsis.

In this study, we have found that normal or mildly elevated CRP levels cannot exclude melioidosis, either on first admission or at relapse. The CRP levels tend to decrease during the first week of admission. Although inflammatory cytokines have been shown to be independent predictors of mortality, CRP levels largely reflect the septic process.