Kaplan Meier plots of the relationship between antibiotics used and duration of fever. 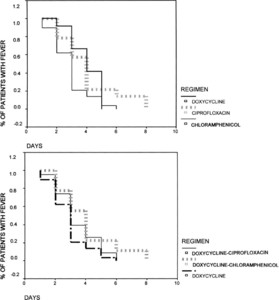 COMPARISON OF THE EFFECTIVENESS OF FIVE DIFFERENT ANTIBIOTIC REGIMENS ON INFECTION WITH RICKETTSIA TYPHI: THERAPEUTIC DATA FROM 87 CASES

Murine typhus is an infectious disease caused by Rickettsia typhi, an obligate intracellular parasite that lives in the cytoplasm of the cells of the host. It is one of the most widely distributed arthropod-borne infections and is more common than is generally accepted. This disease occurs in a variety of environments, ranging from hot and humid, to cold and mountainous, or semi-arid.1 Although it may be clinically mild, severe and even fatal cases have been reported.2 The severity of murine typhus infection has been associated with an older age, delayed diagnosis, hepatic and renal dysfunction, central nervous system abnormalities, and pulmonary compromise. Death occurs in up to 4% of the hospitalized patients.1

The rat flea Xenopsylla cheopis is the principal vector of the parasite. Ingested blood from the domestic rat Rattus norvegicus, which is the common mammalian reservoir host, infects rat fleas.3 The rickettsiae multiply in the intestinal epithelial cells of the flea and are excreted in the feces. Human infection occurs with the inoculation of infected feces at fleabite sites or skin abrasions. The flea feces may also infect via conjunctiva or inhalation.

The disease was first described in Greece in 1932 by Lepine and Lorandos in 1934. Dimissas later reported 1420 cases of murine typhus and 17 deaths in Greece.4 In 1986, 49 cases of the disease were reported on the Greek island of Euboea.5,6

In the early 1990s, the first cases of murine typhus in Chania on the island of Crete were diagnosed by serologic analysis at the laboratory of Clinical Bacteriology, Parasitology, Zoonoses and Geographical Medicine at the University of Crete in Heraklion, Crete, Greece. With a continuously increasing annual rate of serum samples sent to the laboratory, an increasing number of positive results were found. The purpose of this study was to compare, in terms of duration of fever, five different antibiotic regimens administered to patients with endemic typhus.

To re-evaluate our knowledge of the clinical, laboratory, and treatment features of murine typhus and to explore the special features of this disease on Crete, we decided to register all cases of the disease admitted to the General Hospital of Chania. The study, which started in 1993, was conducted in this region.

All patients with clinical suspicion of murine typhus (fever and/or rash and/or headache) were admitted to the hospital. Fever was defined as axillary or rectal temperature of > 37.5°C or > 38.2°C, respectively. An axillary temperature was recorded in 79 of the 87 patients. Treatment with antibiotics was administered immediately upon admission. The type of treatment administered was not previously defined because it was administered according to the admission diagnosis. Therefore, patients were not randomized to receive any regimen. The duration of fever before admission in the hospital was also calculated. Fever was measured every three hours. Patients were kept in the hospital until the fever resolved. Fever resolution was defined as a return to < 37.5°C of all daily temperature measurements. The clinical responsiveness of various antibiotic regimens used against R. typhi was studied using a special questionnaire covering demographic, epidemiologic, clinical, laboratory, and treatment data (such as the antibiotic regimen and the time to defervescence) as well as the complications of each patient. Informed consent was obtained from all participants. The study was reviewed and approved by the Ethical Committee of the General Hospital of Chania.

Serum samples from patients suspected of being infected with R. typhi were assayed for the presence of antibodies against this organism by the an indirect immunofluorescent antibody test. This test was performed as follows. Sera were serially diluted two-fold in phosphate-buffered saline (PBS). Dilutions ranged from 1:25 to the highest detectable for IgA and IgM and from 1:60 to the highest detectable for IgG. Rickettsia typhi antigen (BioMerieux, Marcy L’Etoile, France) was added to 10-well microscopic slides, and the slides were incubated with 10 μL of each serum dilution (one well contained only PBS) in a moist chamber for 30 minutes at 37°C, and then washed two times with PBS for 10 minutes. After the slides were air-dried, the complex was overlaid with fluorescein isothionate-conjugated goat anti-human IgG (Fluoline G; BioMerieux), or with fluorescein isothiocya-nate-conjugated goat anti-human IgM and IgA (Fluoline M; BioMerieux) diluted in PBS containing Evans blue at a dilution of 1:100. The well without serum was also overlayed (conjugate control). Incubations, washings, and dryings were repeated as described for this procedure. Slides were mounted in buffered glycerol (Fluoprep; BioMerieux) and examined using a Zeiss fluorescent microscope (Carl Zeiss, Oderkochen, Germany) at a magnification of 100×. Detection of IgM and IgA were carried out after IgG was removed using rheumatoid factor absorbent (RF Absorbent, BioMerieux).

IgG titers ≥ 1:960 or IgM titers ≥ 1:400 and/or a four-fold increase in the titer between two assays (titers should be at least 1:200) were used as a strong indication of acute infection. We defined cases of acute infection with R. typhi as persons with positive titers and one or more of the following manifestations: fever and/or headache, and/or skin rash.

Statistical analysis was performed using SPSS version 9.0 (SPSS, Inc., Chicago, IL). Antibiotics were compared in pairs in terms of time to defervescence using the log-rank test. A Kaplan-Meier plot (Figure 1) was used to show the relationship between fever responses and the various antibiotics used. Seasonal indexes were calculated by the ratio to trend method.

Between 1993 and 1998, serum samples from 170 patients suspected of having endemic typhus were assayed for the presence of antibodies against R. typhi antigen by the indirect immunofluorescent antibody test.

The initial diagnosis of endemic typhus was confirmed in all patients who presented a rash on admission (52 of 87, 60%). The remaining patients (40%) were admitted with another diagnosis (respiratory problem, urinary tract infection, or only fever). Fever (100%), headache (88%), chills (87%), and rash (81.6%) were the most frequently recorded symptoms in the patients. Other symptoms such as malaise, anorexia, myalgia, cough, perspiration, conjunctivitis, nausea, and joint pain were less common (Table 1).The clinical course was complicated by acute renal failure in four patients (5%). Pulmonary infiltrates were found in four patients (4.6%) and pleural effusion in two (2%).

Murine typhus is an infectious disease with a worldwide distribution, and its incidence has been underestimated.2,7 Despite the current level of reported human cases in the United States (fewer than 100 per year), murine typhus has been the subject of several studies.1,8 To the best of our knowledge, the disease was first reported in Europe in 1986, when cases of endemic typhus were reported on the Greek island of Euboea.9 Since then endemic cases of the disease were also reported on the island of Crete.10

Tetracycline and chloramphenicol are considered the drugs of choice against infection with R. typhi, while reports on fluoroquinolones have shown conflicting results.8,11 Clinical trials with fluoroquinolones for the treatment of endemic typhus have not been performed. These drugs are effective in the treatment of spotted fever rickettsioses, but it is difficult to extrapolate this finding in the absence of clinical studies with typhus.11,12

The time elapsed until defervescence was found to be the same in chloramphenicol- and ciprofloxacin-treated patients, but significantly longer in doxycycline-treated patients. Although this was not a randomized and controlled study, it provides evidence on the efficacy of tetracycline in treating endemic typhus. Treatment with doxycycline plus chloramphenicol or ciprofloxacin did not improve the clinical effectiveness of doxycycline in terms of duration of fever. Although the ciprofloxacin in our study was found to be equally active with chloramphenicol in terms of days until apyrexia, it cannot be considered a valuable alternative until well-designed clinical studies are undertaken to prove its efficacy against endemic typhus.

Because endemic typhus is a potentially fatal disease, awareness, with a view to early diagnosis and treatment, is essential. No patient died of the disease during our study, probably because of early diagnosis, treatment, and availability of local epidemiologic data.

In conclusion, in this study we reconfirmed the value of treatment with doxycycline for endemic typhus. Doxycycline plus chroramphenicol or ciprofloxacin did not improve the effectiveness of doxycycline. Ciprofloxacine was found to exhibit the same efficacy as chloramphenicol in terms of duration of the fever. However, to better evaluate the efficacy and safety of the quinolones in the treatment of infection with R. typhi, prospective and randomized studies are needed.

Clinical findings and complications in 87 patients with murine typhus*