Effect of Julian date on West Nile virus infection in blue jay carcasses collected in Ohio during the summer of 2002. Solid circles represent the proportion of sampled birds that were infected on a given day. The solid line represents the probability of infection as predicted by a logistic regression model including a constant and Julian date. 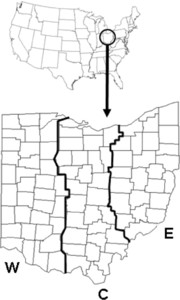 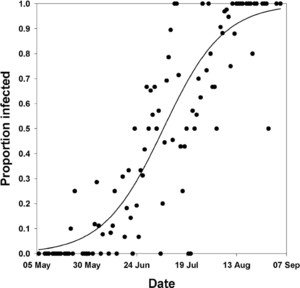 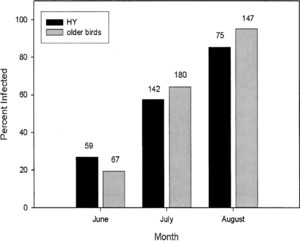 West Nile virus (WNV) was first detected in North America in New York City in 1999 and rapidly moved westward. Understanding the mechanisms by which the amplification cycle is reinitiated each year increases our ability to predict epizootics and geographic expansion of the disease. Such understanding is enhanced by knowledge of the patterns of infection in the vertebrate reservoir hosts. Blue jays (Cyanocitta cristata) may serve as reservoir hosts for WNV. We examined the influence of age and date on the prevalence of WNV in jay carcasses in Ohio during May–August 2002. Percent of carcasses that were infected increased significantly with time from 3% in May to more than 90% by August. We found no difference in prevalence between juvenile (nestlings and fledglings) and adult jays early in the season, which contradicts the expected pattern if the majority of the adults sampled in 2002 had been exposed to the virus in 2001. Therefore, jays infected in 2001 were unlikely to have been important in initiating the 2002 virus cycle in Ohio.