Geographic distribution of Centers for Disease Control light traps (LT) and gravid traps (GT) in Oberlin, Ohio during 2001 and 2002.

Abundance of Culex pipiens/restuans in gravid traps from June to August 2002. 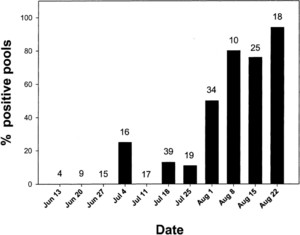 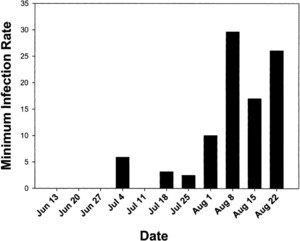 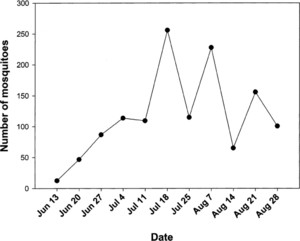 From June 14 to August 30, 2001 and June 10 to August 22, 2002, the mosquitoes of Oberlin, Ohio were surveyed and tested for West Nile virus (WNV). Mosquitoes were trapped weekly using gravid traps and CO2-baited Centers for Disease Control light traps at seven sites in 2001 and eight sites in 2002 in woodlots within the city limits. A total of 12,151 mosquitoes, representing 14 species and one species group, were collected in gravid traps, with Culex pipiens/restuans being the most abundant, followed by Ochlerotatus triseriatus. In light traps, 12,510 mosquitoes were collected, with Aedes vexans being the most abundant, followed by Culex pipiens/restuans. All gravid trap collections were tested for WNV via reverse transcriptase-polymerase chain reaction. West Nile virus was first detected in July 2002. Of all species tested, the Cx. pipiens/restuans species group exhibited the highest minimum infection rate (MIR) and the greatest percentage of positive pools. Both the MIR and percent of positive pools increased significantly with the date, although abundance of Cx. pipiens/restuans in gravid trap collections did not.

West Nile virus (WNV), a member of the Japanese encephalitis virus serogroup in the family Flaviviridae, was first detected in North America in New York City in 1999.1 The virus subsequently spread westward and was first detected in Ohio in July 2001 in a blue jay (Cyanocitta cristata) from Lake County, located in the northeast corner of the state.2 By the end of 2002, WNV was reported in all 88 counties (Ohio Department of Health, unpublished data) and in 90% of blue jay carcasses submitted to the state WNV monitoring program for testing (Garvin MC and others, 2004).3

Avian reservoir hosts and mosquito vectors appear to be important in maintaining the WNV cycle.4,5 Therefore, documentation of patterns and rates of infection in mosquito populations contributes greatly to our understanding of the ecology of this emerging virus and to our ability to predict future activity. To better understand WNV transmission in northern Ohio, we surveyed and tested mosquitoes for WNV during the summers of 2001 and 2002 as part of an ongoing mosquito surveillance program established in 1999. The objectives of this study were to document species of mosquitoes and their relative abundance, as well as the presence and minimum infection rate of WNV in mosquitoes during this period.

This study was conducted within the city limits of Oberlin in Lorain County, Ohio from June 14 to August 30, 2001 and June 10 to August 22, 2002. Mosquitoes were collected using Centers for Disease Control gravid traps (model 1712; John W. Hock Co., Gainesville, FL) located in small woodlots within the Oberlin city proper (Figure 1). One trap was operated at each of six sites (site 1, 2, 4, 5, 6, and 7) in 2001 and an additional trap was added at site 3 in 2002 to provide WNV monitoring for a retirement community. Traps were baited with a mixture of water and freshly mowed grass clippings, which were allowed to ferment for three weeks prior to trapping, and operated for three nights each week. Mosquitoes were removed from gravid trap nets with battery-powered aspirators (Hausherr’s Machine Works, Toms River, NJ) and placed in labeled vials according to trap site.

To monitor abundance of host-seeking mosquitoes not attracted to gravid traps, we operated CO2-baited light traps (Model 512; John W. Hock Co.) at eight sites within the Oberlin city proper from June 14 to August 30, 2001 and June 10 to August 22, 2002 (Table 1). Each trap was supplemented with approximately 1 kg of dry ice stored in a Coleman (Wichita, KS) one-liter cooler suspended next to each trap. Mosquitoes were returned to the laboratory, sorted to species, and frozen at −70 C. Light trap collections were not submitted for WNV testing.

Mosquitoes were identified and sorted to species from each trap. Each species was then pooled for testing so that no more than 50 mosquitoes were in a single pool. Culex pipiens and Cx. restuans were sorted only to the Cx. pipiens/restuans species group because of time constraints and the difficulty of identification by morphologic characters,6 which are often altered after trapping. In 2001, only Cx. pipiens/restuans were submitted for testing; however, in 2002, all 15 species caught in gravid traps were tested (Table 2). Mosquito pools were homogenized in 2.0-mL pre-labeled snap-cap vials containing 1.0 mL of BA-1 medium7 and two BB pellets. Vials were centrifuged to obtain supernatant from which RNA was extracted and purified using the QIAmp Viral RNA Mini Kit (Qiagen, Valencia, CA). The extracts were assayed by a TaqMan Real-Time polymerase chain reaction (PCR) using a TaqMan reverse transcriptase-PCR kit (catalog no. 4309169; Applied Biosystems, Foster City, CA).

For the TaqMan assay, primers and probes with the following nucleotide sequences (5′→3′) as previously described by Lanciotti and others7 were used: forward primer CAGACCACGCTACGGCG, reverse primer CTAGGGCCGCGTGGG, and FAM/TAMRA probe TCTGCGGAGAGTGCAGTCTGCGAT. Thermal cycling was performed using the Bio-Rad I Cycler iQ Real-Time detection system with the iCycler iQ Optical System (Bio-Rad Laboratories, Hercules, CA). At the end of the reaction, the amplification plot generated was viewed on a log scale using the system’s default threshold. Any sample with a normal plot and a threshold cycle value of 35 or less was considered to be positive for WNV. This value has been shown to correspond to the detection of as low as 1–10 plaque-forming units in WNV-infected pools.7

To test for the effect of date on percent positive pools, the minimum infection rate (MIR, expressed as number of pools infected/1,000 mosquitoes tested) and the abundance of Cx. pipiens/restuans, we used a Spearman’s rank correlation coefficient. For all analyses, a P value ≤ 0.05 was considered significant. All statistical analyses were performed using SPSS software (SPSS, Inc., Chicago, IL).

During 2001 and 2002, 2,046 and 10,105 mosquitoes, respectively, were collected in gravid traps and tested for WNV. In 2001, no pools tested positive; however, during 2002, 81 of the 347 pools (23%), representing seven species or species groups, tested positive for WNV (Table 2). Of the positive pools, 92% were Cx. pipiens/restuans, the most abundant species overall. Other positive pools included females of the following species: Aedes vexans, Ochlerotatus canadensis, Oc. japonicus, Orthopodomyia spp., and Oc. triseriatus. In addition, a single male Anopheles punctipennis also tested positive.

The Cx. pipiens/restuans species group appears to be of primary importance in the transmission of WNV in northern Ohio. This group comprised 92% of WNV-positive pools in this study, was the most abundant in our gravid trap collections, and was the second most abundant in our light trap collections. These results confirm previous studies that suggest the key role of one or both of these species in WNV transmission.8,9 Although Ae. vexans was the predominant species in light trap collections (Table 1), the small number of individuals collected in gravid traps, and therefore tested for the virus, prevented us from evaluating its involvement in WNV transmission. This species may serve as an important bridge vector for WNV,10 rather than an enzootic vector given its feeding preference for mammals over birds.11 Similarly, Oc. triseriatus is also a potential vector for the virus; however, because only two of the 66 pools were WNV positive, this species was probably not heavily involved in WNV transmission at our site in 2002. These results are consistent with the low MIRs reported for this species in other field studies.12,13

West Nile virus activity was first detected in Cx. pipiens/ restuans in early July 2002 and steadily increased through the end of August 2002. The latter observation is consistent with the seasonal increase in the proportion of WNV-infected blue jay carcasses submitted to the Ohio WNV monitoring program in 2002 (Garvin MC and others, 2004). This trend may suggest amplification of the virus in bird populations or vertical transmission in mosquito populations.14,15 Although we observed a steady overall decrease in Culex spp. abundance in light trap collections after late July, the increase in MIR and percent of infected pools may reflect the increase in the relative abundance of Cx. pipiens versus Cx. restuans, given that Cx. pipiens has been shown to be the more important vector in other studies.9,12 Difficulties in discerning between these species morphologically precluded our ability to separate them; however, Cx. pipiens does reach greatest abundance in late summer and early fall,16 a trend that may be masked by the early abundance of Cx. restuans. Future studies that include both morphologic and molecular tools to differentiate these two species will allow us to accurately evaluate the relative contribution of each species to WNV transmission.

Our study is unique in documenting variation in MIR among trap sites located within a relatively small, three-mile radius (Figure 1 and Table 3). The highest MIRs of Cx. pipiens/restuans were observed at sites 1 and 3, both located on the periphery of the city and adjacent to large agricultural areas with scattered woodlots. Sites with high MIRs may be occupied by, or positioned adjacent to areas with, high numbers of avian reservoir hosts. A more intense sampling effort may provide the statistical power necessary to more accurately evaluate the spatial variation in MIR.

Summary of female mosquitoes collected in light traps in Oberlin, Ohio, June–August 2001 and 2002