Impact of eight years of mass ivermectin treatment for onchocerciasis on the prevalence of nodules, papular dermatitis, leopard skin, and poor visual acuity in a cohort of 411 persons in Imo Sate, Nigeria. 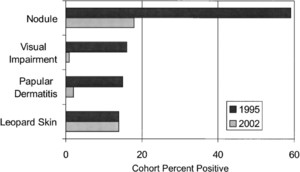 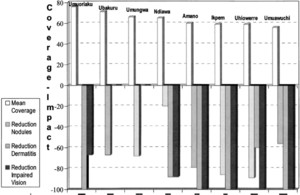 A LONGITUDINAL STUDY OF IMPACT OF REPEATED MASS IVERMECTIN TREATMENT ON CLINICAL MANIFESTATIONS OF ONCHOCERCIASIS IN IMO STATE, NIGERIA

We conducted a cohort study on impact of effects of eight years of annual ivermectin mass treatment administered in eight villages in Imo State, Nigeria. Physical and visual acuity examinations carried out in 462 persons in 1995, prior to the launching of mass drug administration with ivermectin, were compared with re-examinations of 411 (89%) of these same individuals in 2002. We found that gross visual impairment decreased from 16% to 1%, nodule prevalence decreased from 59% to 18%, and papular dermatitis was reduced from 15% to 2%. No change was seen in leopard skin rates (14%). The only incident lesions were three subjects from a single community having the appearance of new nodules (e.g., nodules not identified in the 1995 examinations). Differences in community coverage did not appear to influence the benefit from treatment of individual residents.