Rash on the abdomen of a child with Q fever. 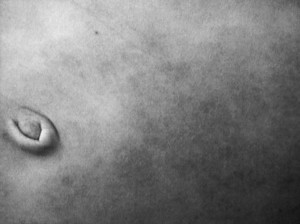 Q FEVER IN CHILDREN IN GREECE

The aim of this study was to investigate the incidence, epidemiology, and clinical manifestations of Q fever among hospitalized children in Greece. During a two-year period, 1,200 children with various clinical manifestations were prospectively tested for Coxiella burnetii infection by indirect immunofluorescence. Acute Q fever was diagnosed in eight (0.67%) patients. No chronic case of infection was detected. Multivariate analysis showed that children 11–14 years old and children reporting consumption of cheese from rural areas were at increased risk for this illness. Clinical manifestations of acute Q fever were pneumonia (two patients), meningitis (two), prolonged fever (two), hepatitis (one), and hemolytic-uremic syndrome (one). Q fever accounted for 2.9% of the cases with prolonged fever, 1.2% of the cases of meningitis, and 0.5% of the cases of pneumonia. Fever and headache were the most common symptoms at presentation. Our study indicates that Q fever is a rare cause of hospitalization during childhood.