Presentation of fully developed Buruli ulcer lesions and of a contracture deformity resulting from scarring.

Prevalence of active and inactive Buruli ulcer cases in 83 villages and settlements in the study area in Cameroon along the Nyong River and some of its main tributaries. The survey area encircled. 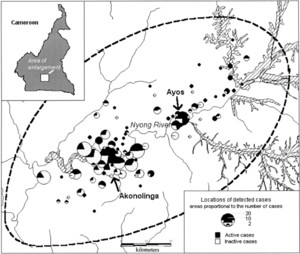 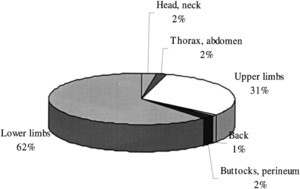 To assess the magnitude of the Buruli ulcer (BU) problem in Cameroon, we conducted a cross-sectional survey in the Nyong River basin and identified on clinical grounds a total of 436 cases of active or inactive BU (202 and 234, respectively). Swab specimens were taken from 162 active cases with ulcerative lesions and in 135 of these (83.3%) the clinical diagnosis was confirmed by the IS2404 polymerase chain reaction. Most lesions (93%) were located on the extremities, with lower limbs being twice as commonly involved as upper limbs. The age of patients with active BU ranged from 2 to 90 years with a median age of 14.5 years. Vaccination with bacilli Calmette-Guérin appeared to protect children against more severe forms of BU with multiple lesions. We conclude that in Cameroon BU is endemic, at least in the study area, and that a comprehensive control program for BU in Cameroon is urgently needed.