Distribution (Robinson projection) of the actual and potential stability of malaria transmission based on regionally dominant vector mosquitoes and a 0.5° gridded temperature and precipitation data set. 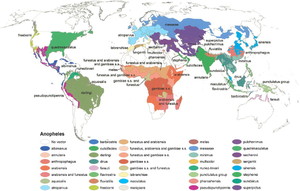 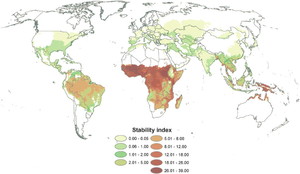 A GLOBAL INDEX REPRESENTING THE STABILITY OF MALARIA TRANSMISSION

To relate stability of malaria transmission to biologic characteristics of vector mosquitoes throughout the world, we derived an index representing the contribution of regionally dominant vector mosquitoes to the force of transmission. This construct incorporated published estimates describing the proportion of blood meals taken from human hosts, daily survival of the vector, and duration of the transmission season and of extrinsic incubation. The result of the calculation was displayed globally on a 0.5° grid. We found that these biologic characteristics of diverse vector mosquitoes interact with climate to explain much of the regional variation in the intensity of transmission. Due to the superior capacity of many tropical mosquitoes as vectors of malaria, particularly those in sub-Saharan Africa, antimalaria interventions conducted in the tropics face greater challenges than were faced by formerly endemic nations in more temperate climes.