Relative viability of Plasmodium falciparum isolates after storage at 4°C (white bars) or room temperature (hatched bars) for 24-96 hours, compared with the same fresh isolates that were immediately cultured. Results are expressed as the mean ± SD relative growth. The numbers of isolates for each experiment are shown above the bars. Experiments were not done for isolates conserved at room temperature beyond 48 hours due to poor viability shown in preliminary tests.

3H-hypoxanthine incorporation in fresh isolates of Plasmodium falciparum during a 42-hour incubation period in relation to hematocrit (Hct) and duration of contact with 3H-hypoxanthine (white bars = 42 hours, hatched bars = 24 hours). Results are expressed as the mean ± SD counts per minute of 24 isolates. 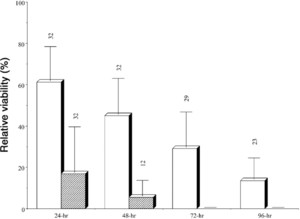 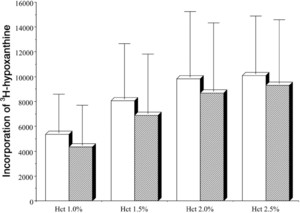 The influence of several factors on parasite growth and 50% inhibitory concentration (IC50) for chloroquine was assessed. Most isolates stored at 4°C up to 72 hours grew when they were subsequently cultivated. However, parasite viability sharply decreased from 24 hours, and the mean chloroquine IC50 decreased significantly (P < 0.05). There was no evidence for selection of pre-culture populations due to storage alone. The time point when 3H-hypoxanthine was added (0 versus 18 hours) had no effect on the IC50 during the 42-hour incubation, but was associated with a lower IC50 when 3H-hypoxanthine was added after the initial 42-hour incubation during the 72-hour incubation. An increase in 3H-hypoxanthine incorporation and chloroquine IC50 was observed as the hematocrit was increased from 1.0% to 2.5%. For the same isolates, chloroquine IC50 values were generally similar when the initial parasitemia was between 0.1% and 0.5% but increased at higher (>0.75%) parasitemias. Based on these results, we recommend immediate cultivation after blood collection, a 42-hour incubation period with the addition of 3H-hypoxanthine at the beginning of incubation, a 1.5% hematocrit, and an initial parasitemia 0.1-0.5%. Further studies on serum substitutes, gas mixture, and comparison of isotopic and non-isotopic assays are needed to establish a standardized in vitro assay protocol.