Gametocyte carriage rates in study subject groups before and after administration of chloroquine (CQ) or sulfadoxinepyrimethamine (SP) for treatment of uncomplicated Plasmodium falciparum infection. 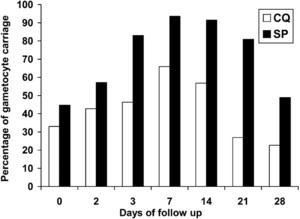 The efficacy of chloroquine (CQ) and sulfadoxine-pyrimethamine (SP) was evaluated in 89 subjects greater than one year of age with uncomplicated P. falciparum malaria in the East Nusatenggara Province of Indonesia. Fever clearance time was longer in the SP group than in the CQ group. However, parasite clearance time was extended in subjects who received CQ compared with those who received SP. Major adverse events were not observed in either group, and no hospitalizations were required during the study. Treatment failure rates at day 28 were 69% for CQ and 8.5% for SP. In both treatment groups, gametocytemia developed during the follow-up period, but was more pronounced in the SP group, peaking at 94% on day 7. Regardless of treatment group, children < 10 years of age had significantly higher treatment failure rates than subjects ≥10 years of age (relative risk = 2.49), suggesting that acquired immunity influenced treatment outcomes in the presence of parasite drug resistance. Although a highly effective alternative to CQ for clearing infection, SP treatment also presented some potential drawbacks (e.g., increased and persistent gametocytemia). Replacement of CQ with SP as a first-line therapy, either alone or in combination with CQ, in those areas of Indonesia with high levels of CQ resistance should significantly improve treatment outcomes, particularly in vulnerable populations lacking clinical immunity. More efficacious and rapidly acting asexual stage treatments are generally associated with increased gametocyte clearance and combination therapy in areas where drug resistance is high or emerging may provide an additional means for reducing transmission.