Total IgG, IgG1, IgG2, IgG3, and IgG4 antibody levels measured by an enzyme-linked immunosorbent assay in serum samples from patients with active symptomatic cystic echinococcosis (CE) (n = 28) and controls (Con) who did not have CE (n = 20). The graph shows the optical density (O.D.) values for each sample analyzed. Mean OD values in the CE groups are indicated by the horizontal bars.

Changes in serum concentrations of total IgG (▵), IgG1 (•), and IgG2 (▪) antibodies among patients (n = 8) in whom cystic echinococcosis (CE) was cured by surgery and anthelminthic chemotherapy but in whom the CE-specific total IgG enzyme-linked immunosorbent assay (ELISA) optical density (OD) values remained ≥ 0.5 during follow-up. The ELISA ODs are plotted against duration of follow-up with time 0 representing the time of diagnosis and initiation of treatment.

Changes in total IgG (▵), IgG1 (•), and IgG2 (▪) enzyme-linked immunosorbent assay optical density (OD) values in two patients in whom relapse of cystic echinococcosis (CE) was detected during follow-up. The times at which treatment was given (T) and the time at which a disease relapse occurred (R) are indicated. 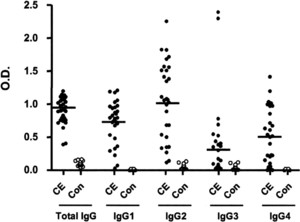 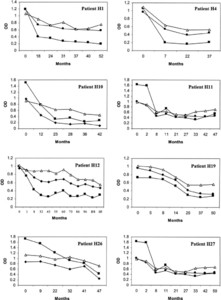 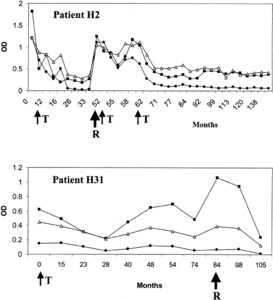 Assessment of post-treatment disease activity among patients with cystic echinococcosis (CE) is insensitive using detection of CE-specific total IgG antibody. This study investigated whether serum concentrations of CE-specific IgG subclasses 1–4 correlate better with disease activity than total IgG. We studied a cohort of patients (n = 28) with symptomatic CE treated with anthelminthic drugs and surgery and who were followed up clinically and radiologically for a mean of 5.6 years (range = 3–12 years). Serial archived sera collected during follow-up were retrospectively analyzed by enzyme-linked immunosorbent assays using crude horse hydatid cyst fluid as antigen. Changes in concentrations of antibodies were correlated with clinical and radiologic outcome. At diagnosis, concentrations of CE-specific total IgG, IgG1, and IgG2 antibodies were significantly elevated in a greater proportion of patients compared with IgG3 and IgG4 antibodies. During post-treatment follow up, the IgG2 antibody response provided the best correlate of disease activity.