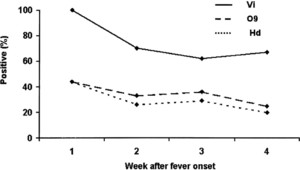 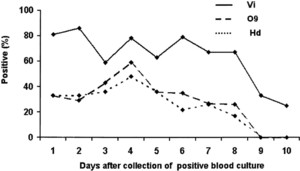 We developed and evaluated an enzyme-linked immunosorbent assay (ELISA) using monoclonal antibodies to capture somatic antigen 9 (O9), flagellar antigen d (Hd), and the Vi capsular polysaccharide antigen (Vi) from the urine of persons with and without typhoid fever. Sequential urine samples were collected from 44 patients with blood culture-confirmed typhoid fever and from two control groups. The first control group included patients with brucellosis (n = 12) and those with clinically diagnosed, non-typhoid, acute, febrile illness (n = 27). The second control group was a sample of healthy volunteer laboratory workers (n = 11). When assessed relative to date of fever onset, sensitivity was highest during the first week for all three antigens: Vi was detected in the urine of nine (100%) patients, O9 in 4 (44%) patients, and Hd in 4 (44%) patients. Sequential testing of two urine samples from the same patient improved test sensitivity. Combined testing for Vi with O9 and Hd produced a trend towards increased sensitivity without compromising specificity. The specificity for Vi exceeded 90% when assessed among both febrile and healthy control subjects, but was only 25% when assessed among patients with brucellosis. Detection of urinary Vi antigen with this ELISA shows promise for the diagnosis of typhoid fever, particularly when used within the first week after fever onset. However, positive reactions for Vi antigen in patients with brucellosis must be understood before urinary Vi antigen detection can be developed further as a useful rapid diagnostic test.