A woman in Benin with an amputation due to Buruli ulcer using her seat to walk. 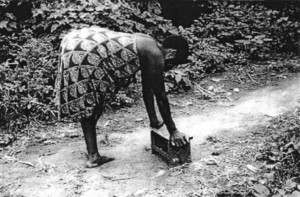 Buruli ulcer, a disease with long-term consequences, is emerging in west Africa. Thus, a functional limitation scoring system is needed to assess its nature and severity. A list of daily activities was developed for this disease. Following treatment of Buruli ulcer, persons in Benin (n = 47) and Ghana (n = 41) were investigated. Nineteen items were identified with good internal consistency. Participants (median age = 14 years) could not perform 23% of their daily activities. Twenty-nine participants did not have any functional limitation. The average limitation score was 31% in Benin and 15% in Ghana (P = 0.006). The mean limitation score in participants without visible contractures (n = 65) was 13%, whereas patients with visible contractures (n = 20) or an amputation (n = 3) had a score of more than 50%. Validity and reliability should be further analyzed to optimize the scale for use in individual evaluation, as an end point in intervention trials, and in planning of resources needed for the care of patients with functional limitations.