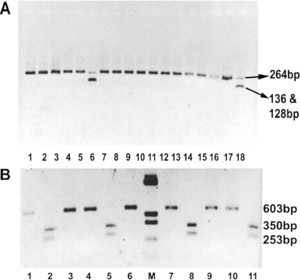 The Plasmodium falciparum chloroquine resistance transporter (Pfcrt) K76T mutation and haplotype (amino acids 72–76) and the P. falciparum multidrug resistance 1 (Pfmdr1) mutation (N86Y) were analyzed as markers of chloroquine resistance in the DNAs of 73 blood samples from patients with P. falciparum malaria in India. Seventy of the 73 DNAs had the Pfcrt K76T mutation. Of these, 66 had the SVMNT haplotype and four had CVIET, the African/Southeast Asian haplotype. Only 20 of 69 DNAs had the Pfmdr1 N86Y mutation. It is surprising that the Pfcrt haplotype in India is predominantly SVMNT, rather than that seen in Southeast Asia. The widespread prevalence of the Pfcrt K76T mutation is a cause for concern.