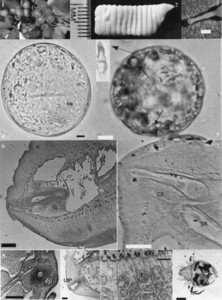 Morphologic studies on preserved and recently collected Bertiella specimens obtained from Mauritian children and an adult indicate that human infection is caused by Bertiella studeri instead of B. mucronata. This cestode might have been accidentally introduced onto the island of Mauritius from the Southeast Asia along with monkeys in the 17th century. We present information that will help identify B. studeri and provide a correct diagnosis. The case reports indicate gastrointestinal disturbances in human bertiellosis. Human infection with Bertiella studeri is reported for the first time in a Mauritian adult.