Comparison of the median number of mononuclear cells per high-power field (MNC/HPF) (A) and the volume fraction of fibrosis (B) in 20 HPFs examined at 400× magnification in left ventricle (LV) free wall sections of hearts from patients with chronic Chagas disease (groups A and B) and dilated cardiomyopathy patients (group C) stained with hematoxylin and eosin and Masson’s trichrome. Median MNC/HPF (C) and percentage of fibrosis (D) were measured in five HPFs of the subepicardial myocardium (cross-hatched bars), five of the outer mesocardium (vertically striped bars), five of the inner mesocardium (diagonally striped bars), and five of the subendocardium (brick-patterned bars). Error bars show the 25% and 75% percentiles. 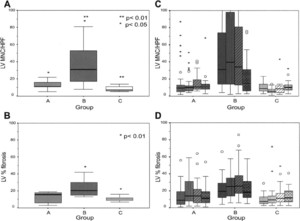 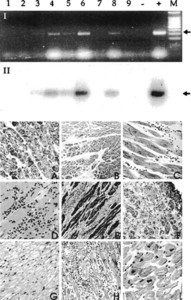 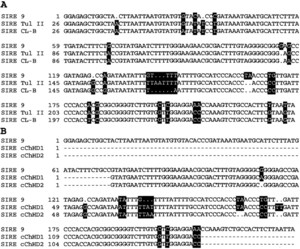 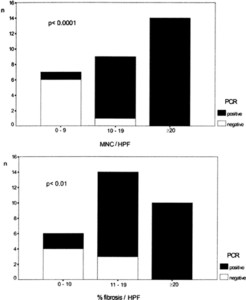 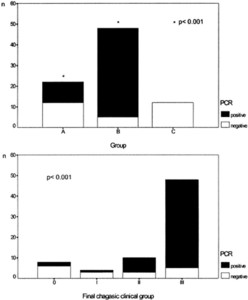 The extent of inflammation, fibrosis, and progression of chronic Chagas heart disease (cChHD) was associated with persistence of parasite DNA in cardiac lesions of necropsies or explants from Argentinean cChHD patients. A Trypanosoma cruzi-based polymerase chain reaction showed a positive result in 1) 15% of cardiac sections with less than 10 mononuclear inflammatory cells/high-power field (440×) (MNC/HPF), 89% with 10–19 MNC/HPF, and 100% with more than 20 MNC/HPF (P < 0.0001); 2) 33% with less than 10% fibrosis, 79% with 10–19% fibrosis, and 100% with more than 20% fibrosis (P < 0.01); 3) 25% of specimens from patients classified in Kuschnir groups 0 and I, 70% in group II and 90% in group III (P < .001); and 4) 45% and 90% of the specimens from cChHD patients without or with heart failure, respectively (P < 0.01). These findings stress the role of the parasite in pathogenesis and disease progression of cChHD.