Morbidity and mortality rates in newborns of Trypanosoma cruzi-infected and uninfected mothers. For definitions of groups and asterisks, see Figure 1. Symptomatic newborns presented at least one of the signs listed in Table 6. The association of severe signs included at least two of the signs frequently associated with prematurity (low birth weight, Apgar score < 7 at one minute, respiratory distress syndrome, or anasarca). 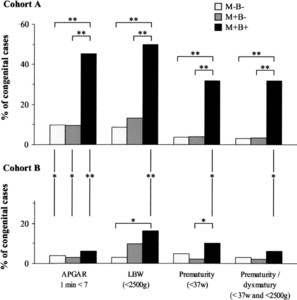 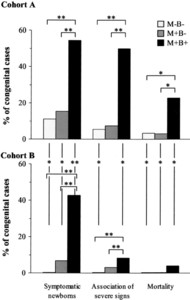 This work compares the results of two epidemiologic and clinical surveys on the consequences of maternal chronic Trypanosoma cruzi infection. They were conducted in 1992–1994 and 1999–2001 in the same maternity clinic in Bolivia, a country highly endemic for infection with this parasite. In both surveys, the materno-fetal transmission of parasites occurred in 5-6% of the infected mothers. Maternal chronic T. cruzi infection had no effect on pregnancy outcome and health of newborns when there was no materno-fetal transmission of parasites. Comparisons between the older and the more recent surveys highlighted significant reductions in frequencies of symptomatic cases (from 54% to 45%), Apgar scores <7, and low birth weights and prematurity (from 32–50% to 6–16%) among congenitally infected babies. Neonatal mortality related to congenital Chagas disease also decreased from 13% to 2% in the interval between both studies. These results suggest that the decrease in poverty that has occurred in Bolivia between both surveys might have contributed to reduce the morbidity and mortality, but not the transmission rate of T. cruzi congenital infection, which remains a serious public health problem in this country.