Schematic diagram showing the final disease classification for all children enrolled in the study.

Box and whisker plots demonstrating the relationship between the day on which shock developed and the three outcome indicators (shock recovery time, total requirement for intravenous [IV] fluid, and requirement for rescue colloid) for all 381 children with dengue shock syndrome who received 20 mL/kg of fluid for initial resuscitation. Statistical comparisons were carried out using the Kruskal-Wallis test. The bold horizontal lines are medians, the ends of the boxes are 25th and 75th percentiles, and the whiskers are the 2.5th and 97.5th percentiles. 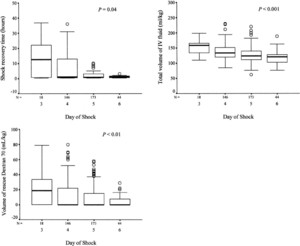 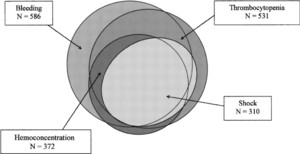 Classification of dengue using the current World Health Organization (WHO) system is not straightforward. In a large prospective study of pediatric dengue, no clinical or basic laboratory parameters clearly differentiated between children with and without dengue, although petechiae and hepatomegaly were independently associated with the diagnosis. Among the 712 dengue-infected children there was considerable overlap in the major clinical features. Mucosal bleeding was observed with equal frequency in those with dengue fever and dengue hemorrhagic fever (DHF), and petechiae, thrombocytopenia, and the tourniquet test differentiated poorly between the two diagnostic categories. Fifty-seven (18%) of 310 with shock did not fulfill all four criteria considered necessary for a diagnosis of DHF by the WHO, but use of the WHO provisional classification scheme resulted in considerable over-inflation of the DHF figures. If two separate entities truly exist rather than a continuous spectrum of disease, it is essential that some measure of capillary leak is included in any classification system, with less emphasis on bleeding and a specific platelet count.