Effect of the number of mosquitoes in a pool on the ability to detect a single laboratory-infected mosquito by a reverse transcription-polymerase chain reaction (RT-PCR). A single eastern equine encephalitis virus-inoculated mosquito was combined with different numbers of uninfected mosquitoes, triturated in 0.75 mL of phosphate-buffered saline, and processed into cDNA. The PCR amplification of the cDNA was accomplished using the E-9657/10004 primer set. The number of infected and unifected mosquitoes per pool is shown. Lane 1, DNA molecular weight marker. Values on the left are in basepairs.

Phylogenetic tree of field-detected eastern equine encephalitis virus (EEEV) circulating in mosquitoes captured in the Amazon Basin region of Peru. Material from field-processed mosquito pools was passed in cultured cells, processed, and amplified by a polymerase chain reaction using the E-9657/10004 primer set. The sequences were determined, trimmed to uniform lengths, and aligned using the MegaAlign program and compared with the Brazil-Peru (lineage II), Argentina-Panama (lineage III), and the North American (Genbank accession number U01034) subtype of EEEV. 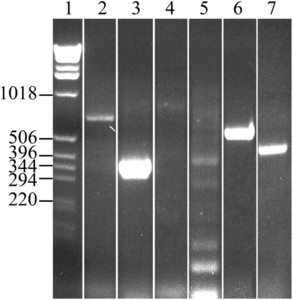 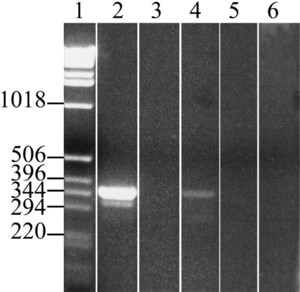 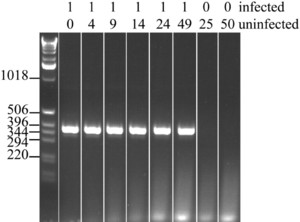 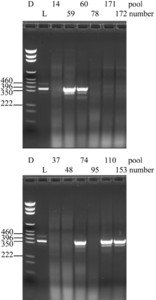 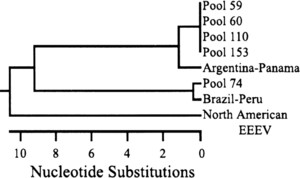 In support of efforts to develop rapid diagnostic assays for use in the field, reverse transcription-polymerase chain reaction (RT-PCR) assays were developed to detect arboviruses circulating in the Amazon Basin region of Peru. Previous knowledge of arthropod/pathogen relationships allowed a focused evaluation to be conducted in November 2000 that assessed the feasibility and reliability of a mobile, rapid, field-expedient RT-PCR diagnostic system aimed at detecting eastern equine encephalitis virus (EEEV) in Culex (Melanoconion) pedroi mosquitoes. Modifications were made to a commercially available mobile molecular laboratory kit and assay procedures were tailored for use under harsh environmental conditions with field-collected and field-processed mosquitoes. From CO2 baited mosquito light traps, 3,227 Cx. (Mel.) pedroi mosquitoes were collected and sorted into 117 pools. The pools were processed and assayed in the field by RT-PCR and five of those pools were found positive for EEEV. Laboratory sequence analysis confirmed the presence of two distinct subtypes of EEEV.