Plot of parasite density versus line intensity of the ICT Malaria P.f./P.v. test for the panmalarial antigen (PMA). All test results were divided into two phases, increasing phase (○) and declining phase (•), according to the point during the course of infection the blood was examined (see Materials and Methods for the classification criteria). Horizontal lines indicate medians. *P < 0.05 and **P < 0.01 indicate significant differences from corresponding results in the declining phase by the Mann-Whitney U test. 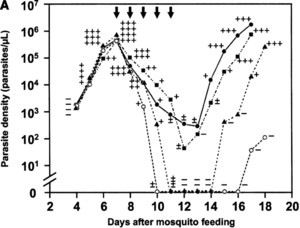 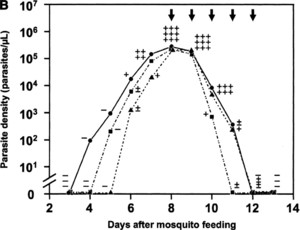 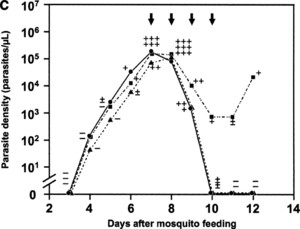 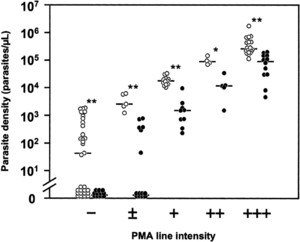 We evaluated the ICT Malaria P.f./P.v. immunochromatographic test for the detection of the panmalarial antigen (PMA) using a rodent malaria model. Mice were infected with Plasmodium berghei by mosquito bite, and blood was examined by microscopy and the ICT test. Treatment with artemether was started when the parasite density exceeded 70,000/μL. The ICT PMA band appeared when the parasite density was more than 2,000/μL, but it continued to be positive after the parasitemia became negative in response to the drug treatment. When all the test results were divided into increasing phase (IP) and declining phase (DP), the sensitivity in the DP was significantly higher than that in the IP, suggesting that the reactivity of the ICT PMA is significantly influenced by persistent and accumulated PMA after drug treatment and longer duration of infection in the DP. Recognizing that the patient population in a clinical situation would be a mixture of individuals in the IP and DP, it should be emphasized that the individual history of recent fever, duration of illness, and drug treatment must be considered carefully for the interpretation of the ICT results.