Comparison of the percentage of Plasmodium falciparum-infected erythrocytes determined by microscopic counting with fluorescence intensity obtained from the microfluorimetric technique. A serial two-fold dilution of a synchronized infected culture (15.0% ring stage) with noninfected erythrocytes was used. Bars indicate the standard deviation of the mean for four independently processed samples. The inset shows the relationship below 1% of parasitemia.

Time course experiments with Plasmodium falciparum-infected erythrocytes by microscopic counting and the microfluorimetric techniques. Parallel cultures of synchronized parasites were initiated at a parasitemia of 0.5% and analyzed at 24 and 48 hours (h). Bars indicate the standard deviation of the mean for two independently processed samples. RFU = relative fluorescence units.

Determination of the 50% inhibitory concentration (IC50) values for chloroquine by the incorporation of 3H-hypoxanthine (top) and the microfluorimetric technique (bottom). Cultures of Plasmodium falciparum W2 strain-infected erythrocytes were initiated at a parasitemia of 0.5%, incubated with different concentrations of chloroquine, and the number of parasites was determined at 48 hours. IC50 values of 88.7 and 86.5 μg/mL were determined for the microfluorimetric and radioactivity-based assays, respectively. Bars indicate the standard deviation from the mean for four independently processed samples. CPM = counts per minute; RFU = relative fluorescence units. 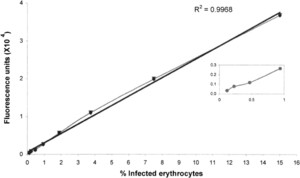 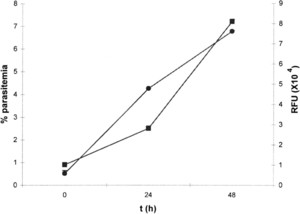 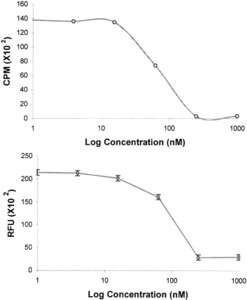 This paper describes the development of a novel microfluorimetric assay to measure the inhibition of Plasmodium falciparum based on the detection of parasitic DNA by intercalation with PicoGreen®. The method was used to determine parasite inhibition profiles and 50% inhibitory concentration values of known or potential antimalarial drugs. Values for parasite inhibition with known antimalarial drugs using the PicoGreen® assay were comparable with those determined by the standard method based upon the uptake of 3H-hypoxanthine and the Giemsa stain microscopic technique. The PicoGreen® assay is rapid, sensitive, reproducible, easily interpreted, and ideally suited for screening of large numbers of samples for antimalarial drug development.