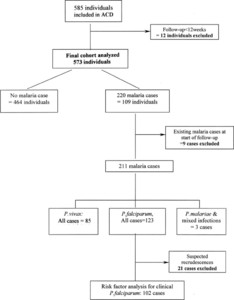 FOREST MALARIA IN VIETNAM: A CHALLENGE FOR CONTROL

Forest malaria is a complex but common phenomenon occurring in southeast Asia. We studied its epidemiology through a prospective community-based study in central Vietnam. A total of 585 individuals were followed for two years by active case detection and biannual cross-sectional surveys. The prevalence of antibodies to Plasmodium falciparum was constantly about 20% across surveys and the incidence rate of clinical episodes of P. falciparum malaria was 0.11/person-year. Multivariate analysis showed that regular forest activity was the main risk factor for clinical malaria and malaria infections. Untreated bed nets had a significant protective effect (60%), except for people regularly sleeping in the forest. The population-attributable fraction for regular forest activity was estimated to be 53%. Our results confirm the major role played by forest activity on the malaria burden in this area and provide the basis for targeting control activities to forest workers. New interventions based on insecticide-treated materials need to be urgently evaluated.