Test of the statistical robustness of predictions derived from ecologic niche models for the Anopheles gambiae complex and final maps. A, Map of Africa showing countries from which distributional data were used to build models (bold outline) and those from which distributional data were used to test models (gray shading) showing sample points overlaid. The inset in 1C shows detail of prediction of the southern range limit of A. arabiensis compared with the final prediction. Predicted distributions of B, A. gambiae, C, A. arabiensis, and D, A. quadriannulatus. The circles in Ethiopia mark sites from which an unnamed sibling species of A. quadriannulatus was identified.2 The lines drawn on the maps for A. gambiae and A. arabiensis indicate the approximate limits of the distribution of A. gambiae and A. arabiensis according to the World Health Organization.15 In all maps, the darker shading indicates greater model predictive agreement of presence.

Predicted ranges of A, Anopheles arabiensis and B, A. gambiae developed from the native range models (Figure 1) and projected onto climate data from 1931 to 1960 for South America. In all maps, darker shading indicates greater model agreement in prediction of presence. The area in which A. gambiae s.l. became established and was eradicated is indicated by the black square in northeastern Brazil. 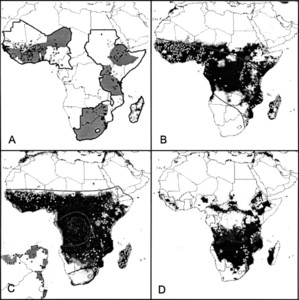 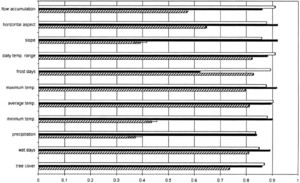 The distribution of the Anopheles gambiae complex of malaria vectors in Africa is uncertain due to under-sampling of vast regions. We use ecologic niche modeling to predict the potential distribution of three members of the complex (A. gambiae, A. arabiensis, and A. quadriannulatus) and demonstrate the statistical significance of the models. Predictions correspond well to previous estimates, but provide detail regarding spatial discontinuities in the distribution of A. gambiae s.s. that are consistent with population genetic studies. Our predictions also identify large areas of Africa where the presence of A. arabiensis is predicted, but few specimens have been obtained, suggesting under-sampling of the species. Finally, we project models developed from African distribution data for the late 1900s into the past and to South America to determine retrospectively whether the deadly 1929 introduction of A. gambiae sensu lato into Brazil was more likely that of A. gambiae sensu stricto or A. arabiensis.