Virus growth in intrathoracically (IT)-inoculated Aedes aegypti. Each mosquito was inoculated with approximately 2.5 log10 plaque-forming units (PFU) of virus in single infections or 1.9 log10 PFU of each serotype in the tetravalent chimeric virus infection. Virus titer shown is the mean titer ± SD (log10 RNA transcripts/ mosquito) from three mosquitoes collected at each time point. Growth of the each ChimeriVax™-DEN serotype in the tetravalent ChimeriVax™-DEN IT inoculation, shown together in D, are also shown in A-C as shaded dashed lines. Growth of IT-inoculated YF-VAX virus is shown in D for comparison. DEN = dengue; YF = yellow fever. 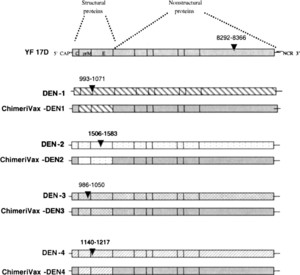 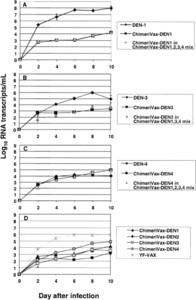 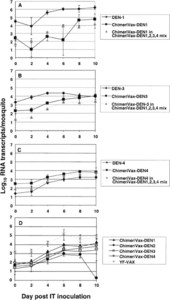 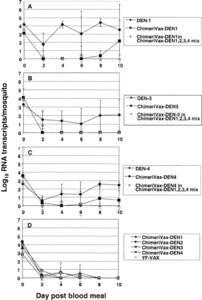 ANALYSIS OF THE REPLICATION KINETICS OF THE CHIMERIVAX™-DEN 1, 2, 3, 4 TETRAVALENT VIRUS MIXTURE IN AEDES AEGYPTI BY REAL-TIME REVERSE TRANSCRIPTASE–POLYMERASE CHAIN REACTION

The vector competence of mosquitoes for chimeric viruses being developed as vaccines to protect against dengue (DEN) virus infection were evaluated in a cooperative agreement with Acambis, Inc. Chimeric viruses have been constructed that contain the premembrane (prM) and envelope (E) genes of each of the wild-type (wt) DEN virus serotypes, DEN-1, DEN-2, DEN-3, and DEN-4, in the yellow fever (YF) vaccine virus (strain 17D) YF-VAX backbone. It was previously shown that the replication profile of ChimeriVax™-DEN2 virus in Aedes albopictus C6/36 cells and in vivo in Ae. aegypti mosquitoes corresponded to that of YF-VAX virus; replication was restricted in C6/36 cells, and Ae. aegypti were poorly infected via an artificial infectious blood meal. Thus, there is very little risk of transmission by mosquitoes of ChimeriVax-DEN2 vaccine virus through the bite of a mosquito. However, because ChimeriVax™-DEN 1, 2, 3, 4 viruses will be administered to humans simultaneously, growth of a mixture of ChimeriVax™-DEN 1, 2, 3, 4 viruses was assessed in both C6/36 cells in culture and in the Ae. aegypti mosquito, which is the primary vector of both YF and DEN viruses. Mosquitoes were intrathoracically (IT) inoculated with virus or fed a virus-laden blood meal, and the replication kinetics of ChimeriVax™-DEN 1, 2, 3, 4 were compared with the wt DEN and YF-VAX viruses. A quantitative real-time reverse transcriptase-polymerase chain reaction assay was developed as a method to detect and differentiate replication of each of the four ChimeriVax™-DEN serotypes in the ChimeriVax™-DEN 1, 2, 3, 4 tetravalent mixture. Growth of the chimeric viruses in C6/36 cells and in IT-inoculated Ae. aegypti was lower than that of YF-VAX virus; in previous studies Ae. aegypti was shown to be refractory to infection by YF-VAX virus. The growth rate of each chimeric virus was similar whether it was a single serotype infection, or part of the tetravalent mixture, and no interference by one chimeric virus over another chimeric serotype was observed. ChimeriVax™-DEN viruses infected mosquitoes poorly via an infectious blood meal compared with wt DEN viruses. Therefore, it is unlikely that a mosquito feeding on a viremic vaccinee, would become infected with the chimeric viruses. Thus, there is very little potential for transmission by mosquitoes of the ChimeriVax-DEN vaccine viruses.