Platelet count by parasitemia in the study population. Pf = Plasmodium falciparum; Pv = P. vivax. The x-axis is truncated and the uppermost Pf quartile midpoint is 268,500. 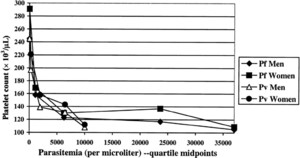 This study examines hematologic profiles of persons with acute Plasmodium falciparum or P. vivax infection in Maesod on Thailand’s western border with Myanmar compared with febrile, non-parasitemic persons also reporting to malaria clinics. Nine hundred seventy-nine subjects were malaria-negative, 414 were infected with P. falciparum, and 646 were infected with P. vivax. Persons with patent parasitemia tended to have significantly lower white blood cell, red blood cell, platelet, and hemoglobin levels than those who were malaria-negative. For the first time, a parallel trend in thrombocytopenia with parasitemia was found to be associated with both P. falciparum, and P. vivax infection. Using logistic regression, persons with platelet counts < 150,000/μL were 12–15 times more likely to have malaria than persons with platelet counts ≥ 150,000/μL. This study supplements previous literature on the hematologic effects of malaria and helps define those alterations for a semi-immune population. Thrombocytopenia is identified as a key indicator of malaria in these febrile patients.