Effect of half-yearly diethylcarbamazine treatment on microfilaremia (dashed lines) and circulating filarial antigenemia (solid lines) in individuals who were microfilaria and circulating filarial antigen positive, respectively, before start of treatment in Masaika, Tanzania (A and B) and Kingwede, Kenya (C and D). A and C indicate prevalence and B and D indicate geometric mean intensity (GMI). Results are expressed as the percent of pre-treatment levels. Only individuals who attended all treatment rounds and follow-up surveys are included. Arrows indicate treatments.

Annual transmission potential (upper graph) and the percent of mosquitoes with infective larvae (lower graph) in Masaika, Tanzania and Kingwede, Kenya before (Year 1) and after (Year 2 and 3 for Masaika and Year 2 for Kingwede) the start of half-yearly mass treatment with diethylcarbamazine. L3 = third-stage (infective) larvae. 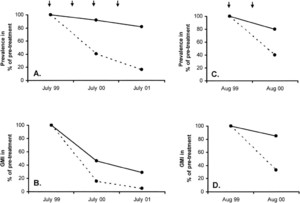 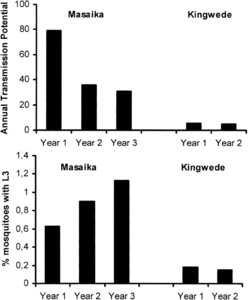 The effect of repeated half-yearly mass treatment with diethylcarbamazine (DEC, 6 mg/kg body weight) on infection and transmission of Wuchereria bancrofti was assessed and compared in communities with high and low endemicity in eastern Africa, with pretreatment microfilaria (mf) and circulating filarial antigen (CFA) prevalences of 29.4% and 53.2% in the high endemicity community and 3.1% and 18.7% in the low endemicity community, respectively. Human infection was monitored by repeated cross-sectional surveys, and transmission by weekly light trap collection of vector mosquitoes in selected houses in each community. Treatments resulted in a progressive decrease in microfilaremia and circulating antigenemia in both communities, with relative reductions being considerably higher for mf than for CFA. Among pretreatment mf-positive individuals, more than 60% were diagnosed as mf negative and mean mf intensities were reduced by 99% in both communities after two treatment rounds. In contrast, only moderate reductions were seen in circulating antigenemia among pretreatment CFA-positive individuals, with mean intensities still being 24–39% of pretreatment values after two treatment rounds. Among the pretreatment mf/CFA-positive individuals, clearance to a CFA-negative status was negligible. Complete CFA clearance was only observed among pretreatment CFA-positive but mf negative individuals who also had much lower initial mean CFA levels than the mf-positive individuals. After treatment, the intensity of transmission decreased in the high-endemicity community, but this appeared mainly to be a consequence of a drought-induced reduction in vector density rather than to reduced mf load in the human population, since the proportion of mosquitoes carrying infective larvae was not reduced. No change in transmission or mosquito infectivity was observed after treatment in the low-endemicity community. Implications of these observations for the control of Bancroftian filariasis are discussed.