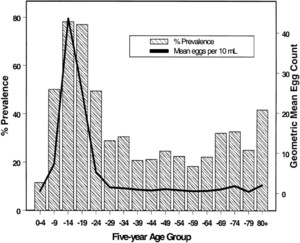 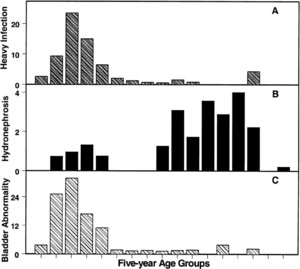 To estimate their heritable component of risk for Schistosoma haematobium infection intensity and disease, we performed a community-based family study among an endemic population in coastal Kenya. Demography and family linkages were defined by house-to-house interviews, and infection prevalence and disease severity were assessed by standard parasitologic testing and by ultrasound. The total population was 4,408 among 912 households, with 241 identified pedigree-household groups. Although age- and sex-adjusted risk for greater infection intensity was clustered within households (odds ratio = 2.7), analysis of extended pedigree-household groups indicated a relatively low heritability score for this trait (h2 = 0.199), particularly after adjustment for common household exposure effects (adjusted h2 = 0.086). Statistical evidence was slightly stronger (h2 = 0.353) for familial clustering of bladder morbidity, with an adjusted h2 = 0.142 after accounting for household exposure factors. We conclude that among long-established populations of coastal Kenya, heritable variation in host susceptibility is low, and likely plays a minimal role in determining individual risk for infection or disease.