Location of the 20 villages studied. The villages belong to Gaojian, Chuanxing, Daxing, and Hainan townships surrounding Qionghai Lake near the city of Xichang in southwestern Sichuan Province in China. A variety of topographic conditions are represented, ranging from flatlands along the lake to steep and highly terraced landscapes at higher elevations.

Map of the irrigation system and results from the snail survey and mouse bioassay for village 10 (Chuangxing Xinlong 7). Note the import of cercariae in the fields south of the river, but isolated fields north of the river. ave. = average.

Relationship between crop types and intensity of infection with Schistosoma japonicum. Villages are ordered left to right in increasing intensity of infection and identified by village number and eggs per gram (E.P.G.) of stool. A high EPG is generally related to larger fractions of land devoted to tobacco and vegetable farming and a correspondingly small percentage of rice farming.

Mean village worm burden in bioassay mice versus cercarial risk predicted by the product of mean village snail density and estimated mean density of parasite eggs in the ditch environment. 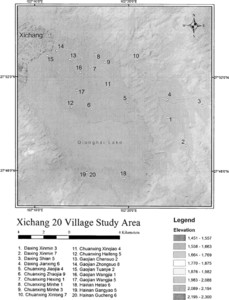 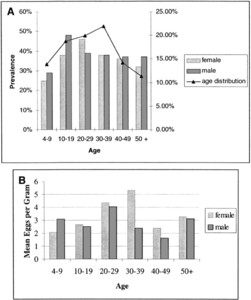 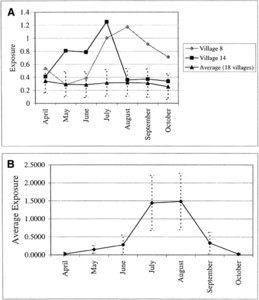 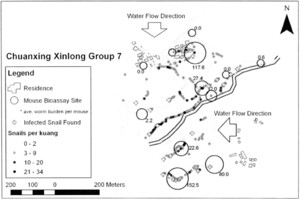 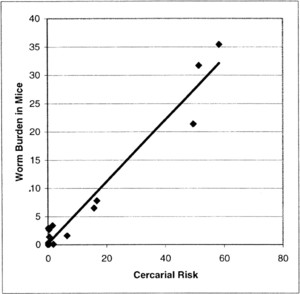 Twenty villages in the Anning River Valley of southwestern Sichuan China were surveyed for Schistosoma japonicum infections in humans and domestic animals. Also surveyed were human water contact patterns, snail populations, cercarial risk in irrigation systems, and agricultural land use. Few animals were infected, while village prevalence of infection in humans ranged from 3% to 68% and average village eggs per gram of stool ranged from 0 to 110. Except for occupation and education, individual characteristics were not strong determinants of infection intensity within a village. Differences in human infection intensity between these villages are strongly associated with crop type, with low-intensity villages principally growing rice, in contrast to villages devoting more land to vegetables and tobacco. Cercarial risk in village irrigation systems is associated with snail density and human infection intensity through the use of manure-based fertilizer. Some of the agricultural and environmental factors associated with infection risk can be quantified using remote sensing technology.