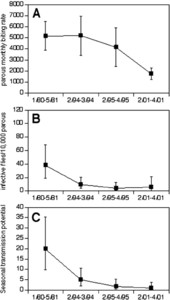 To investigate the impact of mass ivermectin treatments in Mexico on Onchocerca volvulus transmission, entomologic surveys were carried out in the two endemic states of Oaxaca and Chiapas. The data suggest that substantial progress towards the goal of elimination has been made. A comparison pre- and post-ivermectin data from a community in Southern Chiapas showed a 97% decrease in seasonal transmission potential, but some level of polymerase chain reaction positivity was still detectable. In other communities from northern Chiapas and Oaxaca where there are no baseline data, there was an absence or near absence of infective flies. Residual transmission was not evenly distributed because differences were seen in the infection and infective rates from different catch points. These findings suggest that while substantial progress towards elimination has been made in Mexico, it may be necessary to modify ivermectin distribution strategies to eliminate transmission in areas where transmission persists.