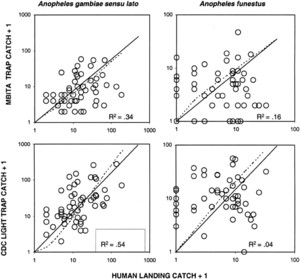 COMPARATIVE FIELD EVALUATION OF THE MBITA TRAP, THE CENTERS FOR DISEASE CONTROL LIGHT TRAP, AND THE HUMAN LANDING CATCH FOR SAMPLING OF MALARIA VECTORS IN WESTERN KENYA

The mosquito sampling efficiency of a new bed net trap (the Mbita trap) was compared with that of the Centers for Disease Control miniature light trap (hung adjacent to an occupied bed net) and the human landing catch in western Kenya. Overall, the Mbita trap caught 48.7 ± 4.8% (mean ± SEM) the number of Anopheles gambiae Giles sensu lato caught in the human landing catch and 27.4 ± 8.2% of the number caught by the light trap. The corresponding figures for Anopheles funestus Giles were 74.6 ± 1.3% and 39.2 ± 1.9%, respectively. Despite the clear differences in the numbers of mosquitoes caught by each method, both the Mbita trap and light trap catches were directly proportional to human landing catches regardless of mosquito density. No significant differences in parity or sporozoite incidence were observed between mosquitoes caught by the three methods for either An. gambiae s.l. or An. funestus. Identification of the sibling species of the An. gambiae complex by a polymerase chain reaction indicated that the ratio of An. gambiae Giles sensu stricto to An. arabiensis Patton did not vary according to the sampling method used. It is concluded that the Mbita trap is a promising tool for sampling malaria vector populations since its catch can be readily converted into equivalent human biting catch, it can be applied more intensively, it requires neither expensive equipment nor skilled personnel, and it samples mosquitoes in an exposure-free manner. Such intensive sampling capability will allow cost-effective surveillance of malaria transmission at much finer spatial and temporal resolution than has been previously possible.