Epidemic curve based on 1998 health records, depicting the onset of fever for persons with Plasmodium vivax malaria in three villages of Ambaná, Bolivia. 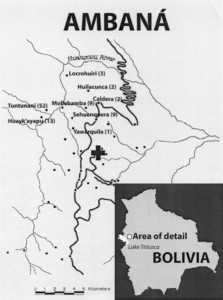 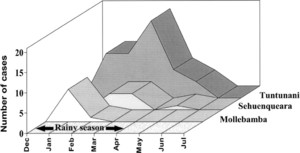 INTRODUCED PLASMODIUM VIVAX MALARIA IN A BOLIVIAN COMMUNITY AT AN ELEVATION OF 2,300 METERS

Tuntunani, Bolivia, a community of 199 persons situated at an elevation of 2,300 meters, experienced its first malaria outbreak in 1998. Blood smears from 63 of 183 symptomatic residents were examined, and 52 showed Plasmodium vivax. An investigation two years later indicated that the epidemic resulted from introduced transmission, since persons of all ages and both sexes were infected, and there had been no travel to low-lying endemic areas in the five months preceding the epidemic. Treatment became available only two months into the epidemic, at which time 58% of the people had been ill for three weeks or longer. This outbreak demonstrates the vulnerability of highland populations with poor access to health care to introduced malaria.