Map of Assam and the other northeastern states of India. The study site, located south of the Brahmaputra River, is denoted by a dot (•) The inset shows the geographic location of the northeastern region of India. 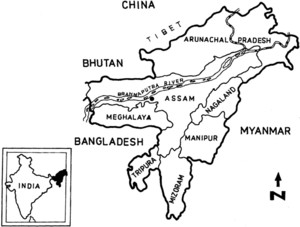 The susceptibility of 23 cases of Plasmodium falciparum malaria from the Sonapur primary health center in the Kamrup district of Assam, India to different antimalarials was investigated using the 28-day World Health Organization in vivo test. Whole blood concentrations of chloroquine, sulfadoxine, and quinine were determined at different intervals and at the time of parasites recrudescence after completion of treatment with the respective drugs to confirm the status of drug sensitivity. A case of multi-drug resistant P. falciparum malaria was found where recrudescence occurred, despite standard oral treatment with chloroquine, sulfadoxine/pyrimethamine, and quinine sequentially. Whole blood concentrations of chloroquine, sulfadoxine, and quinine at the time of recrudescence were 0.35 μg/ml (day 7), 18 μg/ml (day 14), and 0.009 μg/ml (day 14), respectively. Therefore, monitoring of drug-resistant P. falciparum malaria and its proper treatment should be intensified to check the spread of multi-drug resistant strains in other parts of the country.