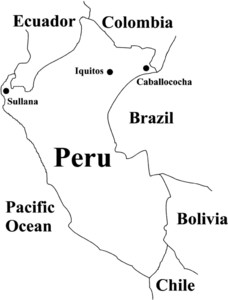 Reports from several sites in South America suggest the presence of isolated cases of chloroquine-resistant Plasmodium vivax malaria. To investigate the possibility of chloroquine-resistant P. vivax in Peru, we conducted 28-day in vivo drug efficacy trials at three sites in the Amazon region and one site on the northern Pacific Coast between 1998 and 2001. A total of 242 patients between the ages of 2 and 60 years were enrolled (177 from the Amazon region and 65 from the northern coast). All subjects received directly observed therapy with chloroquine, 25 mg/kg, over a three-day period. On enrollment, 49% had a documented fever and 96% had a history of fever; their geometric mean parasite density was 5,129 parasites/μL. A total of 212 (88%) of the 242 subjects completed their 28-day follow-up. Four of the 177 patients from the Amazon region had a recurrence of P. vivax parasitemia on days 21 and 28 after treatment was initiated. Two of these patients had chloroquine-resistant infections, based on polymerase chain reaction-single-stranded conformational polymorphism genotyping and chloroquine-desethylchloroquine blood levels, which were ≥97 ng/mL at the time of the reappearance of parasitemia. None of the subjects studied on the northern Pacific Coast had recurrent parasitemia.