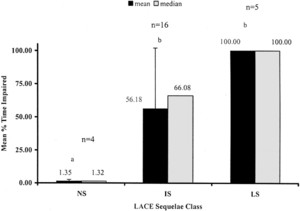 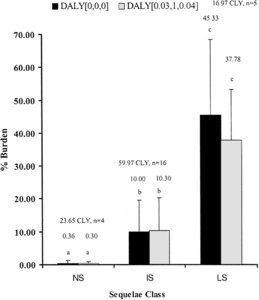 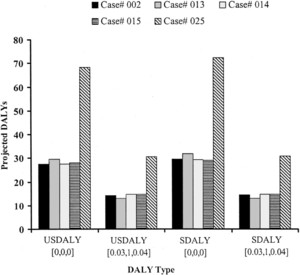 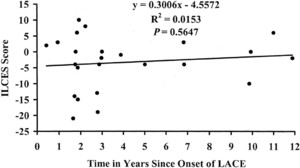 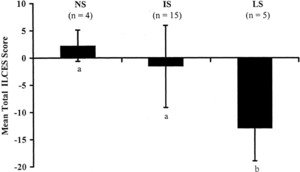 La Crosse encephalitis (LACE), a human illness caused by a mosquito-transmitted virus, is endemic in western North Carolina. To assess the economic and social impacts of the illness, 25 serologically confirmed LACE case patients and/or families were interviewed to obtain information on the economic costs and social burden of the disease. The total direct and indirect medical costs associated with LACE over 89.6 life years accumulated from the onset of illness to the date of interview for 24 patients with frank encephalitis totaled $791,374 (range = $7,521–175,586), with a mean ± SD per patient cost of $32,974 ± $34,793. The projected cost of a case with lifelong neurologic sequelae ranged from $48,775 to $3,090,798 (n = 5). For the 25 LACE patients, 55.15 (54.83%) of the 100.59 cumulative life years (CLYs) were impaired to some degree. Disability adjusted life years (DALYs) were calculated to measure the productive life years lost to LACE. Approximately 13.00 DALYs were accumulated over 100.59 CLYs of study. Projected DALYs for case patients (n = 5) with lifelong neurologic sequelae ranged from 12.90 to 72.37 DALYs. An Impact of La Crosse Encephalitis Survey (ILCES) was used to measure the social impact of LACE over time for case patients and their families. The ILCES scores demonstrated that the majority of the social burden of the illness is borne by the five patients with lifelong neurologic sequelae. The socioeconomic burden resulting from LACE is substantial, which highlights the importance of the illness in western North Carolina, as well as the need for active surveillance, reporting, and prevention programs for the infection.