Map of Iquitos, Peru and location of the Maynas and Tupac Amaru study areas.

Mosquitoes per house in the Maynas a study.

Clusters of Aedes aegypti adults in the Maynas a study based on the number of mosquitoes in houses.

Clusters of Aedes aegypti adults in the Maynas a study based on presence or absence of mosquitoes.

Clusters of Aedes aegypti pupae in the Maynas a study based on presence or absence of pupae. 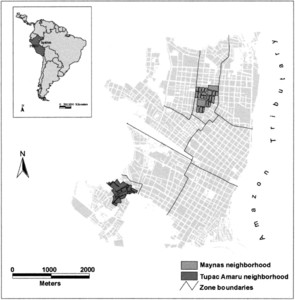 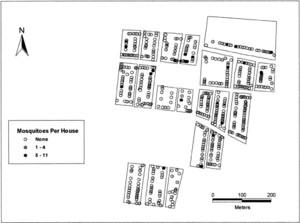 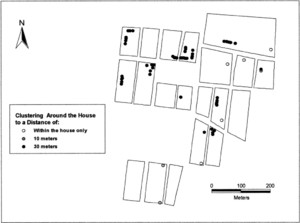 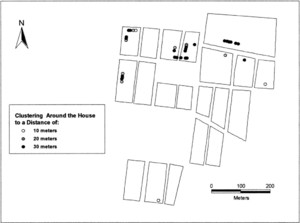 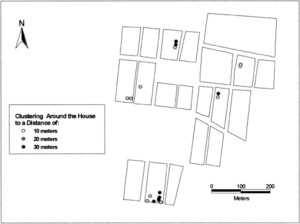 CHARACTERISTICS OF THE SPATIAL PATTERN OF THE DENGUE VECTOR, AEDES AEGYPTI, IN IQUITOS, PERU

We determine the spatial pattern of Aedes aegypti and the containers in which they develop in two neighborhoods of the Amazonian city of Iquitos, Peru. Four variables were examined: adult Ae. aegypti, pupae, containers positive for larvae or pupae, and all water-holding containers. Adults clustered strongly within houses and weakly to a distance of 30 meters beyond the household; clustering was not detected beyond 10 meters for positive containers or pupae. Over short periods of time restricted flight range and frequent blood-feeding behavior of Ae. aegypti appear to be underlying factors in the clustering patterns of human dengue infections. Permanent, consistently infested containers (key premises) were not major producers of Ae. aegypti, indicating that larvaciding strategies by themselves may be less effective than reduction of mosquito development sites by source reduction and education campaigns. We conclude that entomologic risk of human dengue infection should be assessed at the household level at frequent time intervals.