Genetic distances among species within subgeneric groups, between subgeneric groups, and between subgenera. The squares represent the Rogers distance based on nine allozyme loci and the ×s represent the Kimura two-parameter distance using the last 285 basepairs of the mitochondrial cytochrome b gene. The upper and lower limits of the boxes show the upper and lower quartiles. The horizontal line dividing each box is the median. The upper and lower limits of the vertical lines beyond the boxes show the largest and smallest observations within 1.5 interquartile ranges. Observations beyond these limits are plotted individually.

Maximum likelihood tree obtained from nine allozyme loci for 12 Lutzomyia and two Brumptomyia species from Venezuela. The input order was randomize with global rearrangements of species. Brumptomyia beaupertuyi was used as the outgroup.

Neighbor-joining consensus tree of Kimura two-parameter distances based on the last 285 basepairs of the mitochondrial cytochrome b gene of two Brumptomyia and 12 Lutzomyia species from Venezuela. The numbers at each node represent the percent bootstrap support for 1,000 replicates; branches with bootstrap values less than 80% were collapsed. 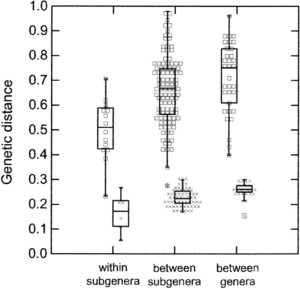 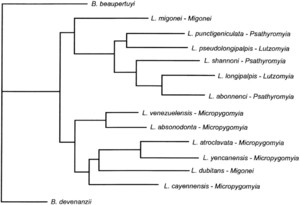 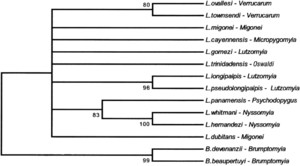 GENETIC RELATIONSHIPS AMONG SOME SPECIES GROUPS WITHIN THE GENUS LUTZOMYIA (DIPTERA: PSYCHODIDAE)

Molecular data on Lutzomyia are very scarce, despite the fact that this genus includes all the species involved in the transmission of leishmaniasis in America. We examine the genetic relationships among eight morphologic groups within the Lutzomyia genus and two Brumptomyia species, using nine enzyme loci and the last 285 basepairs of the mitochondrial cytochrome b gene. The structure of the genetic variation among the species analyzed indicated a closer genetic relationship among members of a morphologic group than between members of different groups. The lower levels of variation recorded among these groups compared with that between Brumptomyia and Lutzomyia suggest a subgeneric status for all of these groups, including Psychodopygus. A maximum likelihood tree for the allozyme data and a neighbor-joining consensus tree for the mitochondrial DNA sequences showed a general agreement with morphologic groups, with only minor differences. Nyssomyia, Verrucarum and Micropygomyia formed separate monophyletic groups. Lutzomyia could not be separated from Psathyromyia, and both Migonei species, L. dubitans and L. migonei, grouped in different clades according to the host species they are found on.