Map of the Leishmania (Viannia)-endemic study site in and near Huánuco, Peru. The town and villages are indicated. m = meters.

Compartmental model of Leishmania (Viannia) transmission in dogs. Incidence rates (λ) and recovery rates (ρ) were calculated using prospective data and solving equations E2 and E3 (see Materials and Methods). At any one time, there are four possible states cohort dog could have been in: PCR− or PCR+ and ELISA− or ELISA+. Numbers in parentheses represent the number of dogs in each state. PCR = polymerase chain reaction; ELISA = enzyme-linked immunosorbent assay.

Cumulative age-prevalence of American cutaneous leishmaniasis infection in dogs according to diagnostic technique: infection, i.e., positive by enzyme-linked immunosorbent assay [ELISA] or polymerase chain reaction [PCR], or both) (A), PCR (B), ELISA (C). Lines are the best-fit to the data as estimated by maximum likelihood; for estimates of λ and ρ (see Table 3). Age-prevalence curves (infection) in different survey years (D). Using the incidence and recovery rates calculated from the prospective surveys, the cumulative age-prevalence was simulated (E). 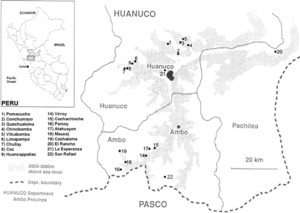 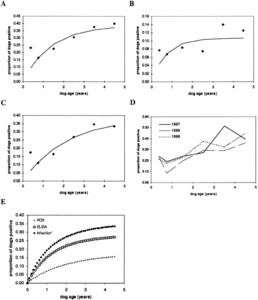