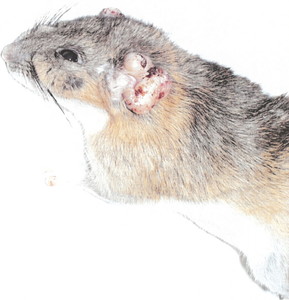 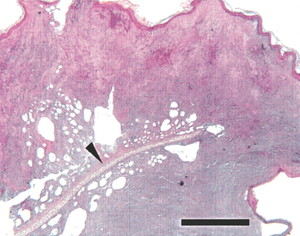 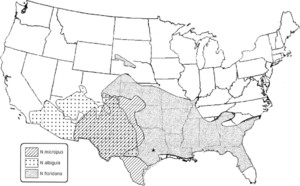 Two species of Neotoma, N. micropus in Texas1,2 and N. albigula in Arizona,3 have been found naturally infected with Leishmania mexicana in the United States. Of the 30 autochthonous human cases of leishmaniasis known from the United States,4,5 all but one can be attributed to residence in, or travel to, habitat that supports populations of N. micropus, the reservoir host in Texas.1,2,4 The case reported by Maloney and others5 is remarkable because the case residence was in Brenham, Washington County, Texas, well outside the geographic range of N. micropus. If that case was locally acquired, it suggests there is a different transmission cycle in eastern Texas, with another vertebrate serving as the reservoir host. We present evidence that the eastern woodrat, N. floridana, is involved in the enzootic cycle in that area.

A homeowner near Bedias, Grimes County, Texas, captured an eastern woodrat in his hay barn on January 21, 2001 and submitted it to the Department of Biological Sciences at Sam Houston State University in Huntsville, Texas. The specimen, a 248-gram adult male, had pinnae that were eroded and replaced by nodular, cauliflower-like swellings covered with crusty scabs (Figure 1). The digits of the feet were swollen with scattered lesions. The specimen was stored at −29°C until screened for Leishmania in January 2003.

The impression smears and histologic sections of the ears and foot were positive for Leishmania. A section of nasal septum examined histologically was essentially normal tissue with no significant lesions.

The most prominent findings on the Giemsa-stained impression smears of tissue from both ears and the left-rear foot were large numbers of neutrophils with fewer, but still numerous, amastigote-laden macrophages. Histologic lesions corresponded with the gross lesions in both ears and the left-rear foot. A severe, nodular granulomatous dermatitis with ulcerated epidermis was noted in all sections. Extremely large numbers of intrahistiocytic and extracellular protozoal amastigotes were present in both hematoxylin and eosin- and Giemsa-stained tissue sections. The dermal collagen within the haired skin of both ears was expanded and the dermis was thickened by nodular cellular infiltrates composed of numerous amastigote-laden macrophages, with fewer lymphocytes, plasma cells, and neutrophils. These nodular dermal thickenings elevated the overlying epidermis on both sides of the pinnal cartilage (Figure 2). Rarely, the pinnal cartilage was disrupted and misshapened by the inflammatory infiltrate. The epidermis was ulcerated in multiple places and the ulcers were associated with prominent neutrophilic inflammation and a fibrinosuppurative crust. The histologic lesions noted in the foot were similar to those noted in the ears, but were less severe. Both ears and all feet were positive by the PCR using generic- and species-specific primers for Leishmania and L. mexicana, respectively, and negative when amplification was attempted using L. (Viannia) spp.-specific primers.

The swollen, nodular appearance of the ears was similar to that seen in an infected specimen of N. micropus.1 In N. micropus, this is an uncommon presentation; in only a very few specimens has erosion of the pinnae and formation of nodular lesions been observed (Kerr SF, unpublished data). Meta-static spread of a Texas isolate of L. mexicana was demonstrated in hamsters, with multiple skin lesions, nodule formation on the ears by four months post-infection, and involvement of the extremities by eight months post-infection.7 In that study, the infection also visceralized, resulting in a Leishmania-positive liver and spleen. The internal organs of the infected N. floridana had been removed prior to screening and were not available for testing, but examination of a portion of the anterior snout indicated that parasites had not spread to the oral or nasal mucosa. The presence of parasites in both ears and the feet of our specimen of N. floridana is indicative of a disseminated, cutaneous infection. Disseminated cutaneous infections in two humans infected in Texas have been reported.4,8

The human case of leishmaniasis reported by Maloney and others5 was remarkable because it was more than 130 km from the nearest populations of N. micropus, the rodent species associated with all other human cases.4 It is the easternmost human case detected in Texas to date and is in the Blackland Prairies and Post Oak Savannah regions of Texas, ecologic regions distinctly different from that associated with other human cases. That case, and the detection of a L. mexicana-infected eastern woodrat in Bedias, suggest that enzootic and zoonotic transmission of L. mexicana occurs in the region. While it is unlikely there is a direct link between the human case in Brenham and an infected N. floridana collected 80 km away, it does suggest the possibility of an enzootic focus in a population of N. floridana closer to the case residence. Additional collections of N. floridana and other rodents to clarify their roles as vertebrate hosts of Leishmania in east Texas are planned.

Neotoma floridana is widely distributed in the south-central and southeastern United States.9 If it is a reservoir host for L. mexicana, its range, combined with those of N. micropus and N. albigula, species previously found infected with L. mexicana, indicates that L. mexicana could potentially occur over much of the southern United States from California to North Carolina (Figure 3).

The probable vector in eastern Texas remains to be identified. Lutzomyia anthophora and Lu. diabolica, the putative vectors of L. mexicana in Texas, are not known to occur in Grimes or Washington Counties.10 This probably reflects a lack of entomologic collections rather than a true absence of sand flies. Collections to document the species of sand flies present in eastern Texas are planned.